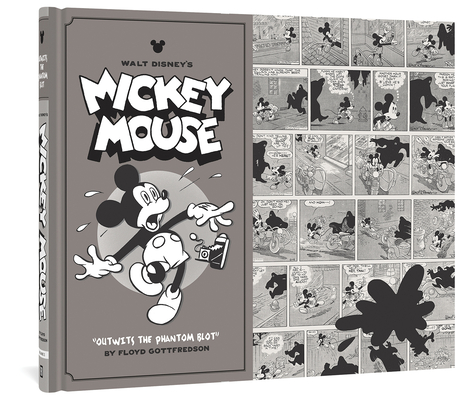 In this collection of the award-winning newspaper strip, Mickey Mouse faces one of his most famous villains.

Hired as a short-term replacement on the fledgling Mickey Mouse daily strip in 1930, Floyd Gottfredson (1905–1986) went on to draw the feature for the next 45 years. He created the most famous Mickey tales ever told in print. He is a Disney Legend and was inducted into the Will Eisner Award Hall of Fame in 2006.

...[T]he stories are great; beautifully drawn and full of clever gags that hold up 75 years later, with thrilling adventure, engaging character and a use of the medium that, in a lot of ways, puts its contemporary superhero comics to shame.
— Chris Sims - ComicsAlliance

With volumes five and six, we see Mickey go on adventures overseas with Goofy, go toe-to-toe with the Phantom Blot, and explore Cave-Man Island. Fantagraphics includes several behind-the-scenes art pieces and tons more extras and commentary in the back of both collections.
— Cameron Hatheway - Bleeding Cool

For superhero fans, imagine that 'The Phantom Blot' is to Mickey what The Dark Knight Returns is for Batman. Not in terms of theme or plot, but in the way that later creators keep going back to that well, trying to recapture its magic.