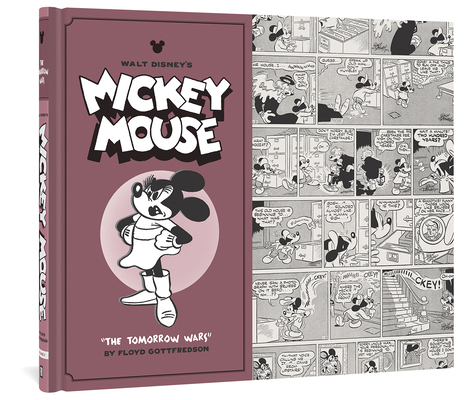 Mickey Mouse travels to the future and battles robots in the eighth volume of the early 20th century newspaper comic strip.

When a magic cloak sends Mickey to the future, he expects to see wild high-tech innovations—but he didn't count on high-tech warlord Pegleg Pete, whose robot Mekka Men hold the World of Tomorrow in an iron grip. It's up to Mickey, Minnie, and fembot femme-fatale Mimi to end this electronic enemy's reign of terror! Floyd Gottfredson, artist of Mickey Mouse from 1930-1975, created decades of masterful stories starring Mickey as an epic adventurer and time-traveler. You never know where—or when—he’ll go next! Case in point: the other tales in this book! You'll find Mickey on Cap'n Skidd's 19th century ghost ship, facing a two-timing island princess! Then Mickey inherits Uncle Max's "House of Mystery"—and his battle against creepy chemist Drusilla and her morbid minions! Restored from Disney's original proof sheets, The Tomorrow Wars also includes more than 20 pages of futuristic extras!

Hired as a short-term replacement on the fledgling Mickey Mouse daily strip in 1930, Floyd Gottfredson (1905–1986) went on to draw the feature for the next 45 years. He created the most famous Mickey tales ever told in print. He is a Disney Legend and was inducted into the Will Eisner Award Hall of Fame in 2006.

...Gottfredson and his collaborators established Mickey Mouse as an adventure strip almost without peer.

The... reprint of Mickey Mouse dailies really stands out for its
critical material. The editors here have an acute sense of historical
context and the oblique relationship the Disney adventure strips had to
the Great Depression and World War II. ...[T]he Gottfredson reprints
really demonstrate how much contextualization enhances a reprint project
like this.
— Steve Smith - min