Now You See It and Other Essays on Design (Hardcover) 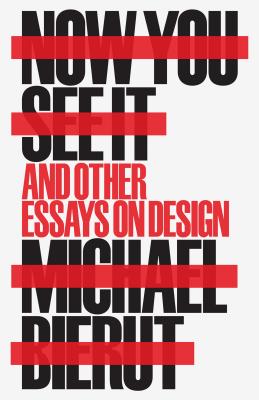 "Design is a way to engage with real content, real experience," writes celebrated essayist Michael Bierut in this follow-up to his best-selling Seventy-Nine Short Essays on Design (2007). In more than fifty smart and accessible short pieces from the past decade, Bierut engages with a fascinating and diverse array of subjects. Essays range across design history, practice, and process; urban design and architecture; design hoaxes; pop culture; Hydrox cookies, Peggy Noonan, baseball, The Sopranos; and an inside look at his experience creating the "forward" logo for Hillary Clinton's 2016 presidential campaign. Other writings celebrate such legendary figures as Jerry della Femina, Alan Fletcher, Charley Harper, and his own mentor, Massimo Vignelli. Bierut's longtime work in the trenches of graphic design informs everything he writes, lending depth, insight, and humor to this important and engrossing collection.

A partner at Pentagram Design's New York office, Michael Bierut has won numerous awards, and his work is in the permanent collections of MoMA; the Metropolitan Museum; the Cooper Hewitt, Smithsonian Design Museum; and the Library of Congress. He is a senior critic in graphic design at Yale University.

"In Now You See It, Bierut displays his polyamorous curiosity and facility for explaining the world through a designer's lens. With his trademark wit and penchant for charming folksy anecdotes, he hops from an essay about the architecture of his childhood home, to several entries about his philosophy on fonts, detours to discussing dalliances with clients and concludes with reflections about his most-discussed work: the Hillary Clinton campaign logo. In each of the book's 53 bite-sized chapters, Bierut demonstrates how a designer can go into one rabbit hole and emerge smarter by taking the time to reflect about the visuals he encounters or produces."
- Quartz

"Bierut is the consummate corporate designer, and his collection of essays, Now You See It, brings you behind the curtain of professionalism to expose exactly how design is produced and functions in the real world. In other hands this might seem esoteric, but there is no more fluid or engaging writer, in any subject; reading Michael Bierut is like listening to Don Draper sell a campaign for Lucky Strike. Better still, in this book you can read Bierut riffing on the implications of Don Draper selling a campaign for Lucky Strike."
- Dallas Morning News

"In this book of essays, Michael Bierut explores topics ranging from typefaces and hoaxes to urban architecture and Hillary Clinton's 2016 presidential campaign. Bierut, a partner at Pentagram, writes with humor about how design shapes our world."
- Fast Company's Co.Design

"This is a story of optimism and curiosity disguised as a book of design essays-an entertaining and encouraging account for those in any creative industry."
- Technical Communication