I Am Because We Are: Readings in Africana Philosophy (Paperback) 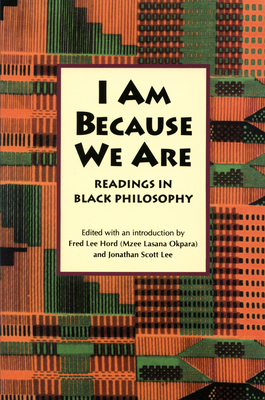 First published in 1995, I Am Because We Are has been recognized as a major, canon-defining anthology and adopted as a text in a wide variety of college and university courses. Bringing together writings by prominent black thinkers from Africa, the Caribbean, and North America, Fred Lee Hord and Jonathan Scott Lee made the case for a tradition of "relational humanism" distinct from the philosophical preoccupations of the West.

Over the past twenty years, however, new scholarly research has uncovered other contributions to the discipline now generally known as "Africana philosophy" that were not included in the original volume. In this revised and expanded edition, Hord and Lee build on the strengths of the earlier anthology while enriching the selection of readings to bring the text into the twenty-first century. In a new introduction, the editors reflect on the key arguments of the book's central thesis, refining them in light of more recent philosophical discourse. This edition includes important new readings by Kwame Gyekye, OyÃ¨rónké OyË˜ewÃ¹mÃ­, Paget Henry, Sylvia Wynter, Toni Morrison, Charles Mills, and Tommy Curry, as well as extensive suggestions for further reading.

"An ambitious book [that] strives to be intellectually and philosophically Pan-Africanist. In an era where more than a 'hyphen' has continually separated Africans and African-Americans and others of African descent, the call to relational humanism and community ethos is a timely one."—The International Journal of African Historical Studies

"A significant and sure-to-be controversial attempt to demonstrate the existence of a black philosophical tradition. . . . It makes available a valuable collection of essays that teachers of philosophy and black studies alike will wish to use in their courses."—Robert Gooding-Williams, author of In the Shadow of Du Bois: Afro-Modern Political Thought in America