A Legacy of Murder: A Kate Hamilton Mystery (Hardcover) 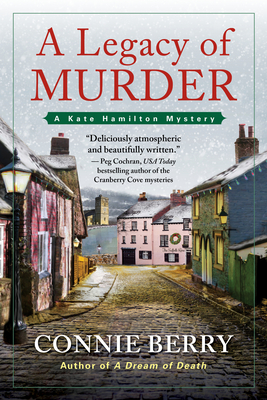 This is book number 2 in the A Kate Hamilton Mystery series.

It’s Christmastime and antiques dealer Kate Hamilton is off to visit her daughter, Christine, in the quaint English village of Long Barston. Christine and her boyfriend, Tristan, work at stately-but-crumbling Finchley Hall. Touring the Elizabethan house and grounds, Kate is intrigued by the docent’s tales of the Finchley Hoard, and the strange deaths surrounding the renowned treasure trove. But next to a small lake, Kate spies the body of a young woman, killed by a garden spade.

Nearly blind Lady Barbara, who lives at Finchley with her loyal butler, Mugg, persuades Kate to take over the murdered woman’s work. Kate finds that a Burmese ruby has vanished from the legendary Blood-Red Ring, replaced by a lesser garnet. Were the theft and the woman’s death connected?

Kate learns that Lady Barbara’s son fled to Venezuela years before, suspected of murdering another young woman. The murder weapon belonged to an old gardener, who becomes the leading suspect. But is Lady Barbara’s son back to kill again? When another body is found, the clues point toward Christine. It’s up to Kate to clear her daughter’s name in Connie Berry's second Kate Hamilton mystery, a treasure for fans of traditional British mysteries.

Connie Berry is the author of the Kate Hamilton Mysteries, set in the UK and featuring an American antiques dealer with a gift for solving crimes. Like her protagonist, Connie was raised by antiques dealers who instilled in her a passion for history, fine art, and travel. During college she studied at the University of Freiburg in Germany and St. Clare's College, Oxford, where she fell under the spell of the British Isles. In 2019 Connie won the IPPY Gold Medal for Mystery and was a finalist for the Agatha Award’s Best Debut. She’s a member of Mystery Writers of America and is on the board of the Guppies and her local Sisters in Crime chapter. Besides reading and writing mysteries, Connie loves history, foreign travel, cute animals, and all things British. She lives in Ohio with her husband and adorable Shih Tzu, Emmie. You can learn more about Connie and her books at her website www.connieberry.com.

Praise for A Legacy of Murder:
"Historic settings, antiquing tips, and a surprising motive in an angst-filled mystery/romance."
—Kirkus Reviews

"A delightful mystery about the secrets of the past, closure, strong friendships, and finding answers."
—Tulsa Book Review

"This cozy has it all: well-developed characters, clever dialogue, [and] a gentle love story that never slows the mystery plot...Readers will eagerly await the next installment."
—Publishers Weekly

"A well-realized cast and a beautifully described setting."
—Booklist

"Readers will appreciate Kate's growth as a character in this atmospheric story. Fans of Jane K. Cleland's books...will want to try this series."
—Library Journal

“A multifaceted gem of a book, it's sure to hold your interest from the first page.”
—Myshelf

"You won't want to put the book down."
—Kings River Life

Praise for A Dream of Death:
“A well-written, intriguing debut mystery...that blends an old island legend with a contemporary whodunit.”
—Library Journal starred review, Debut of the Month

“Suspenseful [and] elegantly written… Readers will look forward to seeing more of the intelligent and resourceful Kate.”
—Publishers Weekly

“Nicely drawn characters with realistic backstories, a romantic historical subplot, and a modern-day flirtation combine to make this a promising start to a new series.”
—Booklist

"An exciting one, with tense and tough moments, aided by its rugged Scottish setting and the author’s entertaining unraveling of the plot."
—New York Journal of Books

“The Scottish atmosphere is captivating, the characters are well-drawn, and the dual mysteries blend together perfectly. This is exactly the type of book that I read cover to cover with barely a break...I honestly recommend this book to anyone who loves a good mystery.”
—MyShelf