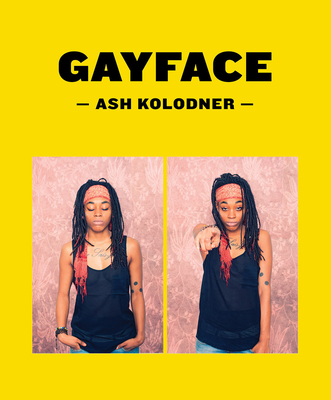 From 2011 to 2015, Brooklyn-based photographer Ash Kolodner (born 1987) traveled across the United States photographing hundreds of LGBTQ+ individuals of all ages. They made two consecutive portraits of each of their subjects, photographing them twice during the same sitting: once with eyes closed and then with eyes open. These diptychs symbolize the vulnerability many have felt at the outset of discovering their personal identities, and then the realization and self-actualization manifest in the intimate and profound process of coming out.

Through more than 180 color portraits, along with subject interviews and contributing texts by filmmaker Kimberly Peirce and Tony award-winning producer Jordan Roth, and icon and performer, RuPaul, Gayface reflects the beauty, intimacy and sometimes the pain of a community kept in the shadows for decades. Ultimately these pictures and this handsome volume represent a revelatory statement on the profound humanity we all share.
Ash Kolodner was born in Washington, DC, and holds a BFA in commercial photography from the Brooks Institute of Photography in Santa Barbara and an MFA in photography from Pratt Institute in Brooklyn. Their first major project, GAYFACE 1st Class, in 2013, is a series of more than 500 portraits of lesbian, gay, bisexual and transgender individuals living in America. Their follow-up series, Showing Face, was exhibited across Philadelphia's subway stations and billboards in 2016 as part of the Philadelphia Mural Arts program. As a commercial photographer, they have photographed artists and musicians including Nas, Damien Marley, Mayer Hawthorne and Nipsey Hustle. Kolodner's work, which ranges from photography to drawing to sculptural installations, has been featured in numerous magazines, newspapers, galleries and group shows, including Miami Beach Art Basel, Toronto Fashion Week, Philadelphia's Mural Arts Project, Huffington Post, Curve magazine and Photographer's Forum.