Critical Thinking In A Nutshell: How To Become An Independent Thinker And Make Intelligent Decisions (Paperback) 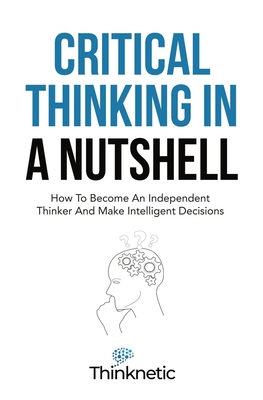 Did you know that 93% of CEOs agree that THIS skill is MORE IMPORTANT than your college degree?

Amazon's market cap is 1.7 TRILLION dollars. And it all started when Jeff Bezos used this skill to see a market inefficiency back in the day, before anyone else.

During the 1980s "Coke Wars," Coca-Cola and Pepsi went back and forth competing to be America's top soda. But Coca-Cola didn't use this skill at the right time... And their mistake almost completely blew up one of America's oldest and most valuable companies.

Having this skill in your back pocket is like shortcutting Malcom Gladwell's 10,000 hours rule to learning something (who's got time for that?).

Nothing complex or fancy.

But it's the skill Supreme Court justices have in spades (they're the highest legal authority in our country because they can do this thing).

That's why Thinknetic has finally released Critical Thinking in a Nutshell: How to Become An Independent Thinker And Make Intelligent Decisions.

Critical thinking is one of those skills everyone "thinks" that they already have...

But most people are anxious, unhappy, doubt their decisions, and aren't where they want to be in life.

But it's not your fault. Our educational system doesn't teach critical thinking. You can only learn it from the right kind of experiences - and most people never do.

In 2011, a study called "It Takes More Than a Major: Employer Priorities for College Learning and Student Success" found that 93% of business leaders agreed "a demonstrated capacity to think critically, communicate clearly, and solve complex problems is more important than a candidate's] undergraduate major."

So, if you feel like you don't have the right diploma or the right skill set to succeed at what you do, don't worry.

But if you thought your degree would get you everything you've wanted out of life, you're going to be disappointed.

After all, critical thinking has driven countless major innovations in human history.

Remember when people thought the Earth was flat? It took a critical thinker to disprove that.

The ancient Chinese general Sun Tzu said, "know your opponent and know yourself; in a hundred battles, you will never be in peril."

You (probably) won't be leading an army into war, but the ability to think clearly will help you keep confident no matter what life throws at you.

Here's just a fraction of what you'll discover inside: