Wonder Woman: The Art and Making of the Film (Hardcover) 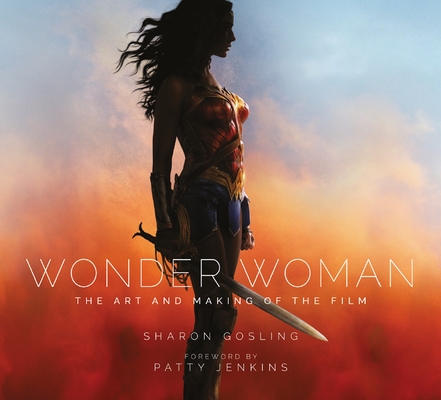 Patty Jenkins’ Wonder Woman sees the hero brought to the big screen for the first time in her own movie, and fully realizes the breathtaking wonder, strength, and grace of such an historic character. Wonder Woman: The Art & Making of the Film celebrates the creation of this groundbreaking movie, taking fans on a voyage of discovery through the world of Wonder Woman. Showcasing the earliest concept art, set and costume designs, sketches and storyboards, the book delves deep into the filmmaking process, from creating the stunning island of Themyscira to the war-torn trenches and towns of First World War Europe.

This official companion explores the Amazons’ rigorous training regimens, their weaponry, armor, Themysciran culture, and the amazing women themselves. With exclusive insights from cast and crew, including director Patty Jenkins, production designer Aline Bonetto, and Diana herself, Gal Gadot, this volume is the ultimate guide to the past, present, and future of one of the most iconic heroes in the world – Wonder Woman.

A fan of all things fantasy, horror and sci-fi, Sharon Gosling is a UK-based writer of both non-fiction and fiction, as well as working as a pop-culture magazine editor and audio drama producer.

“The ‘Wonder Woman’ Art of the Film book might be the best cinematic coffee table book yet.”  Film School Rejects

“Fans of the film will love this book, so it gets a strong recommend from us for anyone who was left wanting more from Wonder Woman.” FilmPulse.com

"This book is the perfect way to celebrate the Wonder Woman movie and gets our highest recommendation." - BatmanNotes.com


“an incredible book and was such a joy to read” fangirlnation.com


“Overall, fans of the film and Wonder Woman will not be able to put this book down.  It is an absolute must for all fans of us. Read more at: https://lrmonline.com/news/wonder-woman-the-art-and-making-of-the-film-review”  Latino Review


“one of the most beautiful modern franchise film books I’ve ever seen, reminding one of the striking compositions, costume work, and iconic imagery that Patty Jenkins uses in her film”  rogerebert.com


“It really is a gateway to learning more about why the Wonder Woman movie has been such a hit, and why it is the best DC movie to date.” Entertainment Buddha

“If you’re into seeing all the love and detail that go into making a major motion picture like Wonder Woman great, then this book is absolutely for you. Really, this book is for damn near anyone” birthmoviesdeath.com


“if you were a fan of Wonder Woman and want to experience more through great photos, I can highly recommend “WonderWoman: The Art and Making of the Film”  Batman-news.com


“Wonder Woman: The Art and Making of the Film is a worthy addition to any Wonder Woman fan’s collection and you’ll be pouring over its pages as it provides a nice look at Patty Jenkins’ wonderful superhero movie” Collider.com


“One puts the book down with renewed appreciation for the efforts of Jenkins, costume designer Lindy Hemming, and star Gal Gadot” The Film Stage

“Like the film itself, Wonder Woman: The Art and Making of the Film is warm and inviting. It’s strong and bold and it’s pretty damn awesome. “ - Cinema Sentries

“an easy must-have” The Mary Sue

“As the first major female superhero and an enduring figure in the comic world, bringing her to film in a way that honored her legacy was no small feat. Wonder Woman: The Art and Making of the Film illustrates just how Jenkins and her team executed that task with wondrous results.” - Project Fandom