World Classics Library: Eastern Philosophy: The Art of War, Tao Te Ching, the Analects of Confucius, the Way of the Samurai, the Works of Mencius (Hardcover) 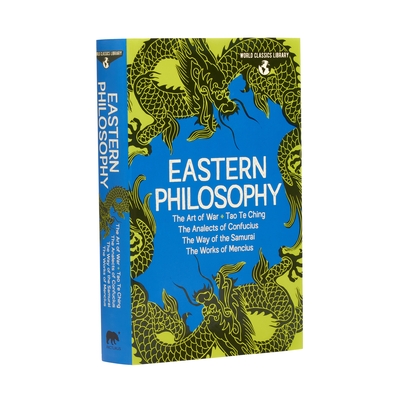 Sincerity is the end and the beginning of all things; without sincerity there would be nothing. - Inazo Nitobe, The Way of the Samurai

This beautiful jacketed hardcover collection brings together five iconic works of Eastern philosophy. Full of timeless wisdom and invaluable advice, these classic Chinese and Japanese texts condense the spiritual teachings from thousands of years of history. Includes:
- The Art of War
- Tao Te Ching
- The Analects of Confucius
- The Way of the Samurai
- Mencius Drawing upon military strategy, leadership, honor and spiritual philosophy, this collection offers penetrating insights which are still pertinent in the modern world. ABOUT THE SERIES: The World Classics Library series gathers together the work of authors and philosophers whose ideas have stood the test of time. Perfect for bibliophiles, these gorgeous jacketed hardcovers are a wonderful addition to any bookshelf.

Sun Tzu was an accomplished general and strategist in China who lived during the Spring and Autumn period (771 - 485BC). His treatise The Art of War is the most famous military text ever written and remains influential to this day. Lao Tzu (an honorific title, meaning 'Old Master') was believed to be a contemporary of Confucius and the father of Taoism in the 6th Century BC. Many modern scholars, however, doubt his existence and contend that the Tao Te Ching was the work of several authors. Inazo Nitobe (1862-1933) was scholar and an educator. After studying at John Hopkins University he maintained his links with the US and tried through his academic career 'to become a bridge across the Pacific'. He wrote Bushido: The Soul of Japan, published here as The Way of the Samurai, in 1899 and the book established his reputation in the West. Confucius (551-479BC) was a teacher, thinker and philosopher, born in the Chinese state of Lu. His lifelong teachings of filial duty, benevolence, morality and sincerity developed into a system of philosophy known as Confucianism which has deeply influenced Eastern philosophies ever since. Mencius (385-303BC) was a Confucian philosopher, referred to as the Second Sage of Confucianism. His teachings on the virtues, ethical cultivation and human nature and have had a great impact on modern philosophy.