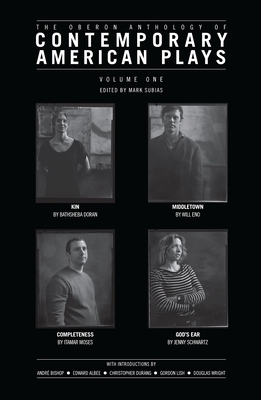 This new series brings together some of the best new writing from contemporary American playwrights.

Volume One is introduced by Andre Bishop, Artistic Director of the Lincoln CenterTheater, the most prestigious theatre in the USA. Each play is introduced by critically acclaimed writers themselves. The volume includes: KIN by Bathsheba Doran, (with an introduction by Chris Durang) Kin sheds a sharp light on the changing face of kinship in the expansive landscape of the modern world. 'Simply terrific. Perhaps the finest new play of the season. Funny andaudacious, haunting, and exquisitely wrought.' Charles Isherwood, New York Times MIDDLETOWN by Will Eno (with an introduction by Gordon Lish) Middletown was awarded the prestigious Horton Foote Prize for Promising New American Play in 2010. 'Middletown glimmers from start to finish with tart, funny, gorgeous little comments on big things: the need for love and forgiveness, the search for meaning in life, the long, lonely ache of disappointment.' Charles Isherwood, New York Times COMPLETENESS by Itamar Moses (with an introduction by Doug Wright) Completeness is a 21st-century romantic comedy about the timeless confusions of love. 'A funny, ridiculously smart new play. I haven't seen another play recentlythat so perfectly captured love - hot-blooded, fearless, fi ckle - at this stagein life. I was left with nothing but admiration.' Jeremy Gerard, Bloomberg News GOD'S EAR by Jenny Schwartz (with an introduction by Edward Albee) 'This ode to love, loss and the routines of life has the economy and drywit of a Sondheim love song ... Schwartz is a real talent and she is trying something ambitious ... In her] very modern way, she is] making a rather old-fashioned case for the power of the written word.' Jason Zinoman, New York Times

Editor Mark Subias is the Head of Theatre at United Talent Agency.