The Umayyad Mosque of Damascus: Art, Faith and Empire in Early Islam (Hardcover) 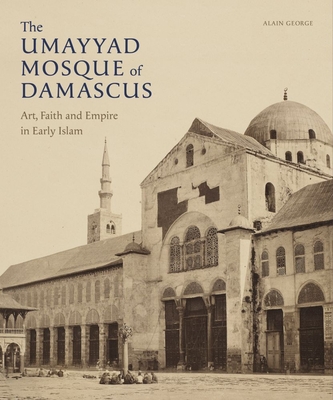 An expansive illustrated history of the historic Umayyad Mosque in Damascus.

The Umayyad Mosque of Damascus is one of the oldest continuously used religious sites in the world. The mosque we see today was built in 705 CE by the Umayyad caliph al-Walid on top of a fourth-century Christian church that had been erected over a temple of Jupiter. Incredibly, despite the recent war, the mosque has remained almost unscathed, but over the centuries has been continuously rebuilt after damage from earthquakes and fires. In this comprehensive biography of the Umayyad Mosque, Alain George explores a wide range of sources to excavate the dense layers of the mosque’s history, also uncovering what the structure looked like when it was first built with its impressive marble and mosaic-clad walls. George incorporates a range of sources, including new information he found in three previously untranslated poems written at the time the mosque was built, as well as in descriptions left by medieval scholars. He also looks carefully at the many photographs and paintings made by nineteenth-century European travelers, particularly those who recorded the building before the catastrophic fire of 1893.

Alain George is the I.M. Pei Professor of Islamic Art and Architecture at the University of Oxford. He is the author of The Rise of Islamic Calligraphy and coeditor of Power, Patronage, and Memory in Early Islam.

Melanie Gibson is series editor of the Gingko Art Series and was formerly head of art history at New College of the Humanities, London.

“This is an important study that brings many fresh insights to a building that has already generated much scholarship. George is sensitive to the need to resolve discontinuities between primary textual accounts and the physical record of the standing structures and excavated material. This book will be read by specialists, but will also gain a wider readership among researchers engaged with similar problems in other regions and historical periods.”
— Marcus Milwright, University of Victoria, Canada

“For the first time we have a book which does full justice to the Umayyad mosque in Damascus. George has used text, archaeology and perhaps most revealingly, old photographs to produce a rich scholarly, readable and exciting account of the mosque. This book marks a major advance in our understanding of the building.”
— Hugh Kennedy, London University

“George provides a vivid picture of the Umayyad mosque as it was designed and erected at the very beginning of the eighth century. This book is a scientific and aesthetic tour de force and will become an indispensable reference for historians and architecture lovers.”
— Mathieu Tillier, Université Paris-Sorbonne