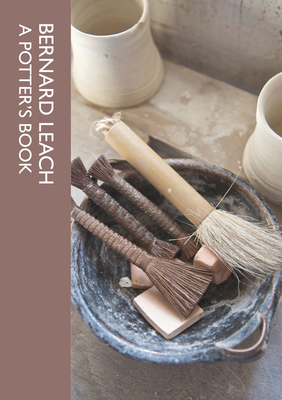 When potters throw clay onto a stone, they make a connection across centuries to ancient workshops. The techniques and traditions of these early craftsmen, especially those of China’s Sung dynasty, still inform many of the pottery practices in use today, thanks to the seminal work of Bernard Leach.

Leach’s A Potter’s Book was among the first to collect ancient workshop traditions for modern use in studios, emphasizing functional work. It became an immediate hit among potters who embraced its ideal of unity, spontaneity, and simplicity of form. Leach, considered the father of British studio pottery, went on to establish of one of the most respected studios in the world with the ideas of A Potter’s Book at its foundation.

With this classic book, potters can learn everything, from how to set up their workshop to how to adapt pigment and glaze recipes to how to design custom kilns. It spotlights four types of pottery: Japanese raku, English slipware, stoneware, and oriental porcelain. Thanks to Leach’s time in Japan and collaborations with master potter Shoji Hamada, it also serves as a fascinating look at the interplay between Eastern and Western art.

Bernard Howell Leach (1887–1979) was a British studio potter and art teacher. He was the founder of the Leach Pottery at St Ives in Cornwall and went on to teach some of the most celebrated ceramicists of the twentieth century.

“With his writings as well as with his ceramics, Leach played a major role in elevating the status of the European potter from craftsman to artist, thereby paving the way for the twentieth-century studio pottery movement.”
— New York Times

"This updated edition of the classic by Leach (British potter and teacher) belongs on every ceramist’s bookshelf. Minor text changes, a look at Leach’s impact on the West, and numerous color photographs make this an even more valuable resource than the 1940 original.
Highly recommended."
— Choice

"This fine new edition of A Potter’s Book, first published in 1940, shows representative images of his work (and sometimes his son David’s) alongside Japanese or Korean wares made from similar bodies or using similar glazes. It is always easy to spot the Leach."
— Times Literary Supplement

"This edition, published 75 years after the first edition in 1940, remains faithful to Leach’s text, while also including color versions of the original images (where available), color images of his pots, and additional images to clarify various points. A preface by Leach’s grandson, Philip Leach, updates the family’s story and frames the important role this book has played in countless potters’ lives."
— Ceramic Arts

"Despite the idiosyncrasy of Leach’s East-meets-West output and ideas, he expressed these so often and with such solemn conviction in numerous books, talks and tours that by the 1950s they had become doctrine. A Potter’s Book (1940) had the greatest impact: even today, its mixture of poetry, philosophy and practical instruction earns it the soubriquet 'the potter’s bible'."
— Apollo