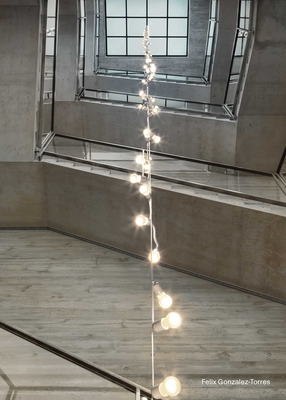 One of the most significant artists to emerge in the late 1980s and early 1990s, Felix Gonzalez-Torres’s reduced formal vocabulary, conceptual rigor, and evocative use of everyday materials resonates with meaning that is at once specific and mutable, rigorous and generous, poetic and political.

Featuring several key bodies of work from throughout the artist’s career, this publication showcases a series of distinct installations at David Zwirner in New York in 2017. The interplay with the specific architecture of the gallery and the way works are installed is highlighted throughout the catalogue, with images that explore the poetics of how space and work influence each other. Together, in their radical openness to interventions of site, audience, and context, the works on view challenge perceived notions of what constitutes an exhibition space, a public, an artwork itself. Despite the resolute abstraction of much of his work, Gonzalez-Torres worked with familiar materials, from his iconic candy spill works and his evocative light string pieces, but also including mirrors, clocks, and curtains. His work activates the architecture of the various spaces, the physicality of the viewer, the past and present, continuously maintaining its relevance.

Opening with details of the exhibition and images of visitors in the spaces, the publication walks the reader through each piece. New text by David Breslin explores the variety of works included here while contextualizing Gonzalez-Torres’s contribution to art history.

Felix Gonzalez-Torres (1957–1996) began his art studies at the University of Puerto Rico before moving to New York City in 1979, where he attended the Whitney Independent Study Program, first in 1981 and again in 1983. He received his BFA from Pratt Institute, New York, in 1983 and his MFA from the International Center of Photography and New York University in 1987. From 1987 to 1991, Gonzalez-Torres was a part of the artist collective Group Material, whose collaborative, politically-informed practice focused on community engagement and activist interventions. Gonzalez-Torres died in 1996 from AIDS-related complications.

David Breslin is the DeMartini Family Curator and Director of the Collection at the Whitney Museum of American Art. Prior to joining the Whitney, Breslin was the John R. Eckel, Jr. Foundation Chief Curator at the Menil Drawing Institute in Houston, Texas. Breslin has organized exhibitions such as Raw Color: The Circles of David Smith and Monet | Kelly and co-curated Make It New: Abstract Painting from the National Gallery of Art, 1950-1975 and An Incomplete History of Protest: Selections from the Whitney’s Collection, 1940-2017. Breslin has written essays on the work of Valentin Carron, Jenny Holzer, Cady Noland, Pablo Picasso, and Paul Thek, among others.

Gonzalez-Torres’s art “continuously works. Whatever those rules were that Felix set out, whatever those boundaries were, the work maintains its ability to continue to evolve and sustain its core.”
— Andrea Rosen

The exhibition “offers an in-depth look at some of the late conceptual artist’s greatest hits, all drawn from museums and private collections."
— Casey Lesser

“These works, representing different moments of the artist’s whole career, are intimate and expansive, and presented together, their radical openness to interventions of site, audience,   and context challenge perceived notions of what constitutes an exhibition space, a public, an artwork itself.”
— The Editors

The exhibition is “so full of meaning that it feels as if the walls might burst.”
— M.H. Miller

“This mix of narcissism, generosity, aesthetic beauty, and politics grounds this exhibition without offering easy answers on how to read Gonzalez-Torres’s beautiful art and legacy in politically charged times."
— Phillip Griffith