Dogwinks: True Godwink Stories of Dogs and the Blessings They Bring (The Godwink Series #6) (Hardcover) 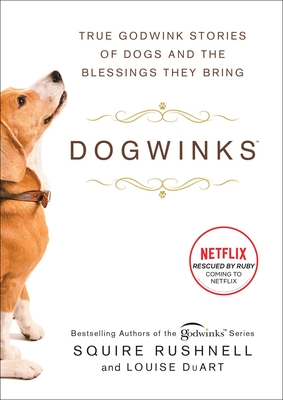 This is book number 6 in the The Godwink Series series.

Includes the story Rescued by Ruby—now on Netflix!

The bestselling and beloved Godwink series returns with a charming, dog-focused collection of “joyful” (The Washington Post) stories, all of which provide plenty of hope, encouragement, and laughter.

With delightfully uplifting stories and enthralling prose, DogWinks is the perfect gift for dog lovers of all backgrounds. Featuring several never-before-published and true stories about coincidences and divine intervention, DogWinks is an inspirational and entertaining book that illustrates the overwhelming power of faith and how miracles can change our lives and those of our canine companions.

SQuire Rushnell is a popular speaker and New York Times bestselling author who has coined the term “Godwink,” now in mainstream usage. Within more than one million books in print, SQuire’s Godwink stories are a popular monthly feature on Today. He has also appeared on several national television programs including Fox News Channel’s Fox & Friends and CBS Sunday Morning. As a veteran ABC Television Network executive, he led Good Morning America to the number one spot and oversaw the acclaimed Schoolhouse Rock! series and the ABC Afterschool Specials. Programs under his direction have captured more than seventy-five Emmy Awards.

Louise DuArt costarred with Tim Conway and Harvey Korman in sold out performances for fifteen seasons. Clean and funny, Louise executes fast-paced conversations between herself and Bart Simpson, Judge Judy, Barbra Streisand, Hillary Clinton, and dozens more. She was a popular Women of Faith speaker and has coauthored three books with her husband, SQuire. She hosted a popular daily talk show on the ABC Family channel for eight seasons, Living the Life, and has starred in various Broadway productions, garnering rave reviews.

"Joyful...These stories will make you want to give your pup an extra biscuit and a hug." —Washington Post