Ecclesiastes (The Book of Archbishop Robert Dwyer): A Selection of His Writings (Paperback) 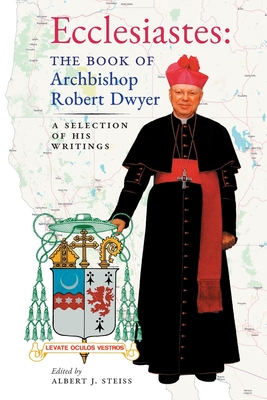 T. S. Eliot has remarked that "preacher" and "prophet" are odious terms (despite the fact that Ecclesiastes, "the preacher," is the name assigned to Solomon as author of one of the most haunting books of the Old Testament; and the prophets are inspired). But it is clear that the Bishop's newspaper articles (except satirical and narrative pieces) were very often conceived as sermons; an intention which affected not only their matter but their style. One is surprised to note how many of the columns might be delivered with professional grace from a pulpit or rostrum, with hardly a word changed. The language is sonorous; the pace of the argument is deliberate; the humor builds patiently and claims the indulgence of the hearer. Almost always one senses an audience-the writing is public utterance; seldom the colloquy of two persons; never the intense whisper of the poet meditating alone. - From the Brief Life

Archbishop Dwyer was a sower not a reaper. He lived the fulfilling but also agonizing life of a sower, who puts the seed into the good earth, but only those with vision can foretell the harvest. The sower always is a lonely man. He does a labor, which others will reap. In spite of the gallery of adoring friends and the many admiring readers of his articles I think he too was a lonely man. When those with lesser vision thought that he was attacking the wrongs of the present-so he had to be in their eyes a conservative, if we want to use labels-he was prophesying about a future which very few had the clarity of mind to foretell. Yet, so shortly after his death the new era of culture, a new age of man already stands on the threshold of human development and many started to see its contours. The world which he was pointing toward is fast approaching. He was an all important link in the chain of human events in pilgrimage toward the future.

He could, when the rest of humanity could not yet say:

Lift up your eyes and see

The ﬁelds are shining for harvest.

- A Sketch from Memory, Isabel Piczek