St. Ursula and the Eleven Thousand Virgins of Cologne: Relics, Reliquaries and the Visual Culture of Group Sanctity in Late Medieval Europe (Paperback) 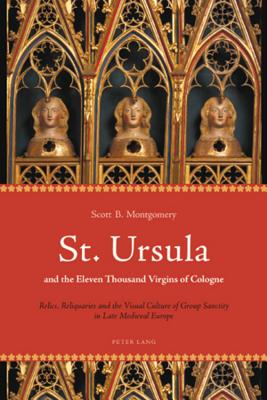 The cult of St. Ursula and the Eleven Thousand Virgin Martyrs of Cologne was the most widespread relic cult in medieval Europe. The sheer abundance of relics of the Eleven Thousand Virgins, which allowed for the display of immense collections, shaped the notion of corporate cohesion that characterized the cult. Though the primacy of St. Ursula as the leader of this holy band was established by the tenth century, she was conceived as the head of a corporate body. Innumerable inventories and liturgical texts attest to the fact that this cult was commemorated and referenced as a collective mass - Undecim millium virginum. This group identity informed, and was formulated by, the presentation of their relics, as well as much of the imagery associated with this cult. This book explores the visual, textual, performative, and perceptual aspects of this phenomenon, with particular emphasis on painting and sculpture in late medieval Cologne. Examining the ways in which both texts and images worked as vestments, garbing the true core of relics which formed the body of the cult, the book examines the cult from the core outward, seeking to understand hagiographic texts and images in terms of their role in articulating relic cults.