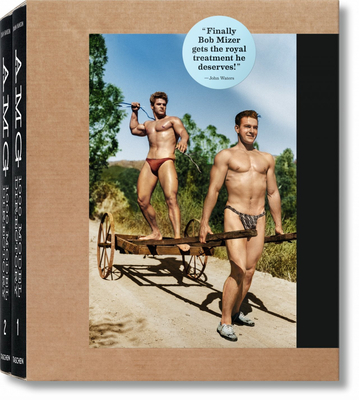 In 1945 Bob Mizer began taking photographs of strapping young men on Muscle Beach in Venice, California. In December of that year he formed the Athletic Model Guild to market his photos, and "physique photography" was born. Before Mizer there were bodybuilders and men who photographed them, but AMG photos, even those of the same men, were different, subtly provocative, discretely aimed at a gay audience. They weren't nude, but showed as much as the law allowed in 1945.

In 1951 Mizer launched Physique Pictorial, America's first indisputably gay magazine, bringing his photos of top bodybuilders to grateful readers worldwide. By the late '50s Mizer had photographed over 1,000 men, moving from the beach to his quirky Los Angeles studio, where he introduced props including Greek columns, Roman headdresses, rear projection, and famously, his mother's glassware, for theatrical Hollywood effect. In 1957 he published a catalog featuring all his men, titled 1000 Model Directory. In 1968 a second 1000 Model Directory followed, with the men photographed in the intervening years. The little 98-page books became instant collectibles, but the photos were so small, 12 to a page, that they were as frustrating to view as they were titillating.