Isidro Ferrer. about Nothing (Hardcover) 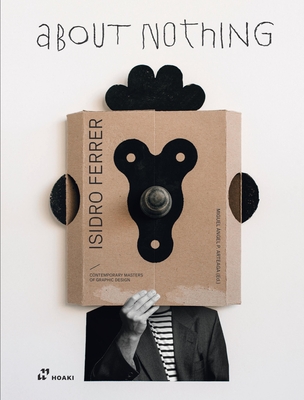 The creative world and visual work of award winning illustrator and designer Isidro Ferrer in an exceptional book.

This generously illustrated book explores the art of creative thinking through the visual work, writings and experiences of world-renowned Spanish graphic designer and illustrator Isidro Ferrer. Readers will find examples of his extensive work, the most recognizable and the most unknown, and insights into the personality and creative processes of this multifaceted artist. Structured around different concepts such as farce, disorder, wandering and time, the book includes descriptive texts that portray the artist's vision of his work as a creator as well as a series of brief, vivid texts that illustrate how, over the years, the artist has put his theories and beliefs about such notions as the nature of time, memory and language into practice.

Isidro Ferrer began his career as a trained actor and set designer before devoting himself to graphic design and illustration. As a result, throughout his career theater posters have always played a central role in his creative work, in addition to puppets, illustrations of everyday objects and animated films. He has published dozens of picture books for children and adults and produced hundreds of posters, fragile objects, large facades, sculptures, textiles, brand images and lamps during an illustrious career in which he has used a variety of mediums, techniques and communication channels to express in images his passion for the theatre of life. He is regularly invited to teach design and illustration workshops all over the world. He is the winner of the 2002 Spanish National Design Award and the 2006 Spanish National Illustration Award, and is an avid traveller.