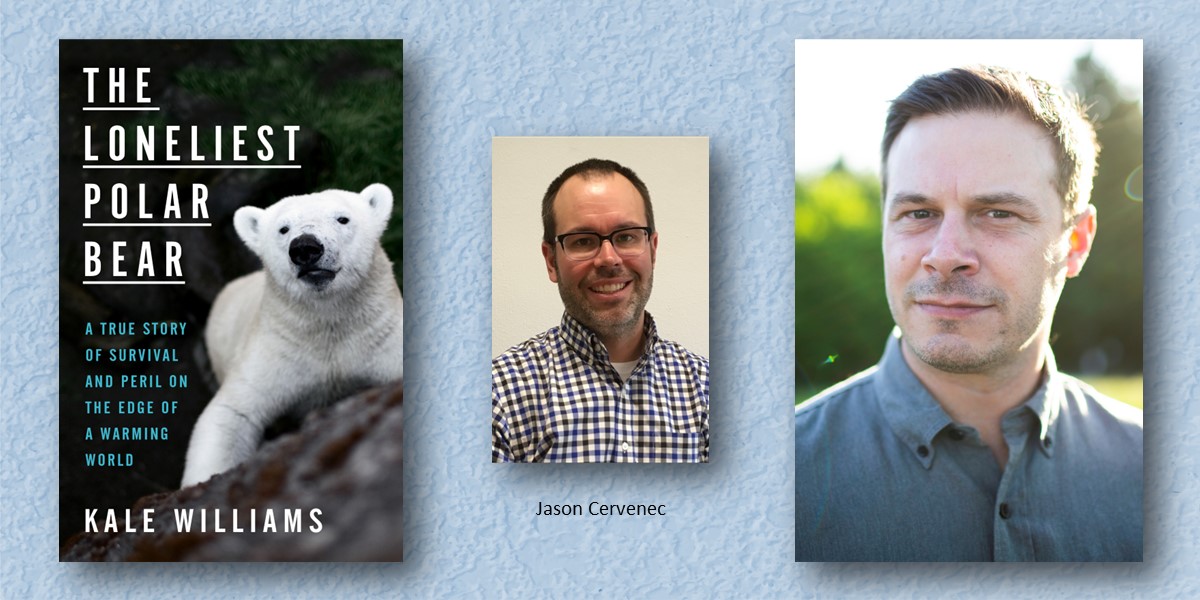 Join Science and Environment Journalist Kale Williams, author of The Loneliest Polar Bear: A True Story of Survival and Peril on the Edge of a Warming World, in conversation with Byrd Polar and Climate Research Center’s Jason Cervenec for a conversation about the accelerating climate crisis now facing us, hosted on the Zoom Webinar platform.

Registration is on Eventbrite where you will receive login information and full instructions close to the event. A general admission ticket to access the event is $5; a ticket that includes THE LONELIEST POLAR BEAR waives the admission fee and is $30 with tax and includes a signed bookplate for the first 50 registrants. Registration closes at 5:00 pm on the day of the event.

The Byrd Polar and Climate Research Center at Ohio State University is Gramercy’s partner for this program.

The Loneliest Polar Bear is the heartbreaking and ultimately hopeful story of an abandoned polar bear cub named Nora and the humans working tirelessly to save her and her species, whose uncertain future in the accelerating climate crisis is closely tied to our own. Dr. Jane Goodall called it “a moving story of abandonment, love, and survival against the odds.”

Six days after giving birth, a polar bear named Aurora got up and walked away from her den at the Columbus Zoo, leaving her tiny squealing cub to fend for herself. Hours later, Aurora still hadn’t returned. The cub was furless and blind, and with her temperature dropping dangerously, the zookeepers entrusted with her care felt they had no choice: They would have to raise one of the most dangerous predators in the world by hand. Over the next few weeks, a group of veterinarians and zookeepers worked around the clock to save the cub, whom they called Nora.

Humans rarely get as close to a polar bear as Nora’s keepers got to their fuzzy charge. But the two species have long been intertwined. Three decades before Nora’s birth, her father, Nanuq, was orphaned when an Inupiat hunter killed his mother, leaving Nanuq to be sent to a zoo. That hunter, Gene Agnaboogok, now faces some of the same threats as the wild bears near his Alaskan village of Wales, on the westernmost tip of the North American continent. As sea ice diminishes and temperatures creep up year after year, Agnaboogok and the polar bears—and everyone and everything else living in the far north—are being forced to adapt. Not all of them will succeed. Sweeping and tender, The Loneliest Polar Bear explores the fraught relationship humans have with the natural world, the exploitative and sinister causes of the environmental mess we find ourselves in, and how the fate of polar bears is not theirs alone.

Kale Williams is a reporter at The Oregonian/OregonLive, where he covers science and the environment. A native of the Bay Area, he previously reported for the San Francisco Chronicle. He shares a home with his wife, Rebecca; his two dogs, Goose and Beans; his cat, Torta; and his step-cat, Lucas.

Jason Cervenec is the Education and Outreach Director for the Byrd Polar and Climate Research Center at The Ohio State University. Jason currently has four NSF-funded research projects and led the development of the Columbus Climate Adaptation Plan. In 2010, Jason taught high school science for 11 years and, during that time, took part in a Fulbright Teacher Exchange in Mumbai, India where he witnessed firsthand the challenges faced by much of the world’s population.

The Loneliest Polar Bear: A True Story of Survival and Peril on the Edge of a Warming World (Hardcover)