A conversation about memoir (and other forms of creative nonfiction) with two masters: Lee Martin and Dinty W. Moore! 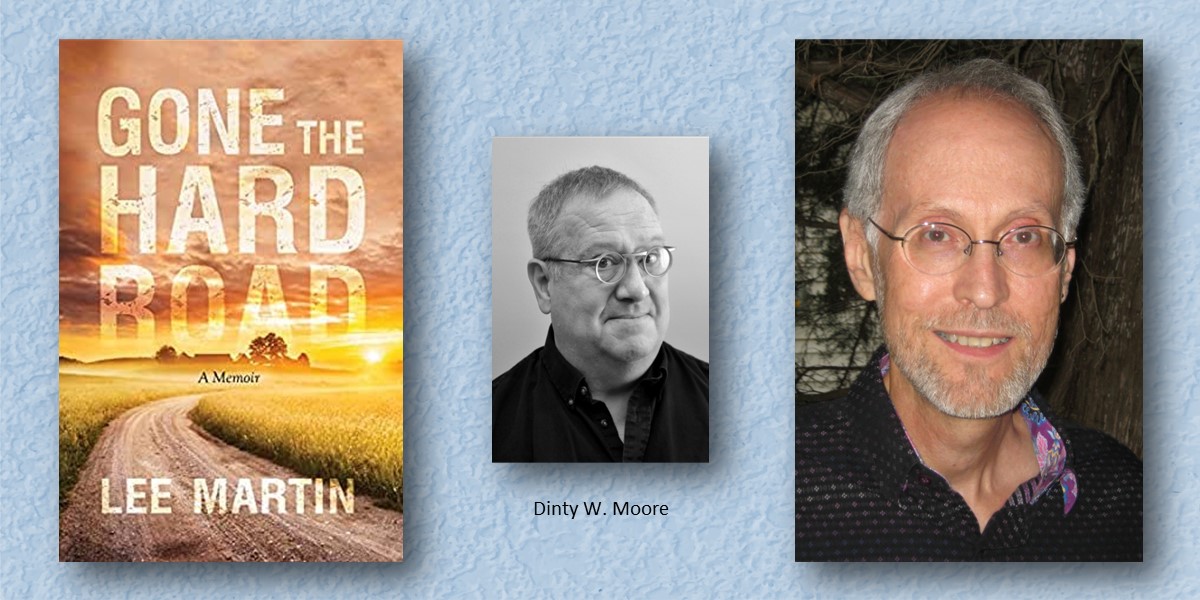 Join two masters of the narrative nonfiction form in a conversation about memoir. Lee Martin’s latest memoir, Gone the Hard Road, will be the catalyst for this discussion with acclaimed creative nonfiction scholar/author Dinty W. Moore.

Registration is on Eventbrite for this Zoom Webinar program. A general admission ticket to access the event is $5; a ticket that includes GONE THE HARD ROAD waives the admission fee and is $22 with tax. Registration closes at 5:00 pm on the day of the event.

"Count your blessings," his mother told him, "Think of everything good in your life."

Pulitzer Prize finalist Lee Martin has done it again. Building from his acclaimed first memoir, From Our House, which recounts the farming accident that cost his father both his hands, Gone the Hard Road is the story of Beulah Martin's endurance and sacrifice as a mother, and the gift of imagination she offered her son. Martin unfolds the world she created for him within their unsettled family life, from the first time she read to him in a doctor's office waiting room, to enrolling him in a children's book club, to the books she bought him in high school. Gone the Hard Road portrays Beulah's selflessness as the family moved around the Midwest, sometimes in the face of her husband's opposition, to show her son a different way of being. Rather than concentrate on the life his father threatened to destroy, as Martin's previous memoirs do, Gone the Hard Road offers the counternarrative of a loving mother and the creative life she made possible, in spite of the eventual cost to herself.

A poignant, honest, and moving read, Gone the Hard Road will stay with anyone who has ever struggled to find their place in the world.

Lee Martin’s fiction and nonfiction have appeared in such places as Harper's, Creative Nonfiction, and The Best American Essays and he is the author of many novels, including The Bright Forever, a finalist for the 2006 Pulitzer Prize in Fiction. He is also author of Yours, Jean; The Mutual UFO Network; and Late One Night, among others. Lee is the winner of the Mary McCarthy Prize in Short Fiction, the 2006 Alumni Award for Distinguished Teaching from The Ohio State University, and he has received fellowships from the National Endowment for the Arts and the Ohio Arts Council. He teaches in the MFA Program at The Ohio State University, where he is a College of Arts and Sciences Distinguished Professor.

Dinty W. Moore is Professor Emeritus in Ohio University’s English Department, which he joined in 2007, leading its creative writing program from 2008 until 2020. His recent memoir, To Hell with It: Of Sin and Sex, Chicken Wings, and Dante’s Entirely Ridiculous Inferno, is his personal and jesting reflection on religion’s influence on culture and society. His other books include the memoir Between Panic & Desire (winner of the Grub Street Nonfiction Book Prize in 2009), The Mindful Writer, The Accidental Buddhist, The Emperor’s Virtual Clothes, the writing guide Crafting The Personal Essay: A Guide for Writing and Publishing Creative Nonfiction, and the craft anthology The Rose Metal Press Guide to Writing Flash Nonfiction. Dinty has published essays and stories in numerous journals and publications from The Southern Review to The New York Times Sunday Magazine. He is the editor of Brevity: The Journal of Concise Literary Nonfiction and is the co-editor of the anthology: The Best of Brevity: Twenty Groundbreaking Years of Flash Nonfiction.

To Hell with It: Of Sin and Sex, Chicken Wings, and Dante's Entirely Ridiculous, Needlessly Guilt-Inducing Inferno (American Lives ) (Paperback)