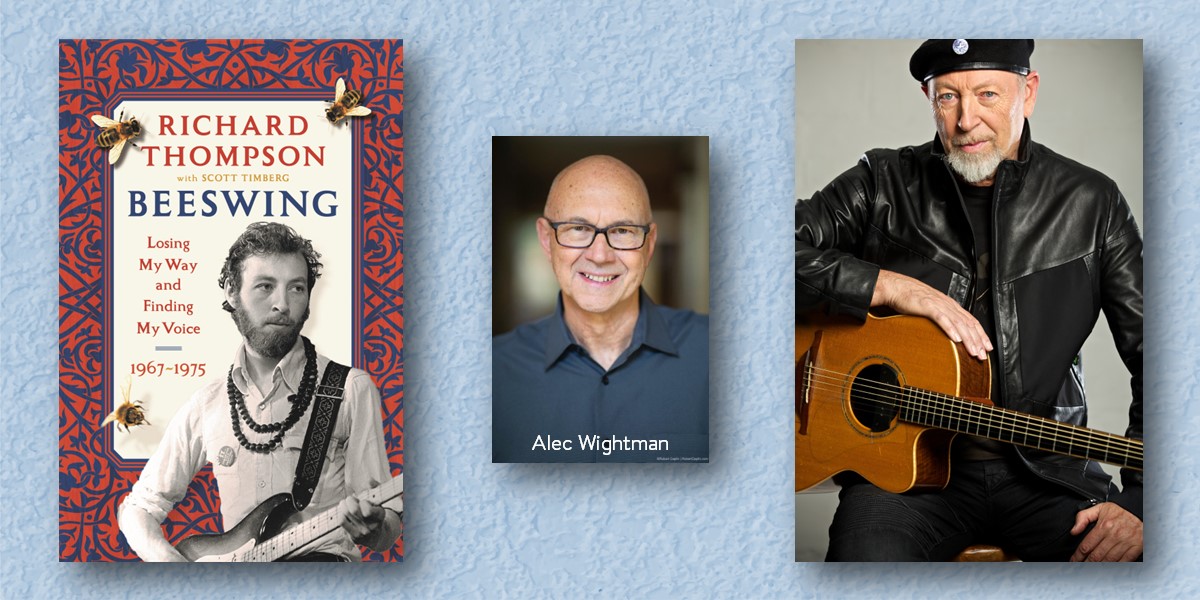 Join the profoundly influential guitarist and songwriter Richard Thompson as he shares his beautifully written memoir, Beeswing: Losing my Way and Finding my Voice, an intimate look at a period of great cultural tumult, and his own pivotal years of 1967 to 1975. Richard will be interviewed by music devotee Alec Wightman, whose Zeppelin Productions has promoted national act singer-songwriter concerts in Columbus since 1995. Alec is a board member of the Rock and Roll Hall of Fame, where he served as Chair from 2013 to 2016.

Registration is on Eventbrite for this Zoom Webinar event. A general admission ticket to access the event is $5; a ticket that includes Beeswing waives the admission fee and is $30, which includes tax. Registration closes at 5:00 pm on the day of the event.

Zeppelin Productions and Natalie’s are Gramercy’s Community Partners in presenting this program.

Known for his brilliant songwriting, his extraordinary guitar playing, and his haunting and lovely songs, Richard Thompson has garnered a longtime cult following and is considered one of the top 20 guitarists of all time by Rolling Stone. Now, in his first memoir, he lyrically chronicles the start of his legendary career.

Thompson packed more than a lifetime of experiences into his late teens and twenties. From the pivotal years of 1967 to 1975, he matured into a major musician, establishing the genre of British folk rock with the era-defining band Fairport Convention, only to depart for a duo act with his wife, Linda, at the height of the band's popularity. His discovery and ultimate embrace of Sufism profoundly reshaped his approach to everything in his life and, of course, the music he wrote thereafter. In this intimate memoir, Thompson recreates the spirit of the 60s as he found, and then lost, and then found his way again, and takes us inside life on the road in the UK and the US, crossing paths—and occasionally sharing the stage—with the likes of Led Zeppelin, Pink Floyd, Jimi Hendrix, and more.

Like Patti Smith's Just Kids or Marianne Faithfull's Faithfull, Beeswing vividly captures the life of a remarkable artist during a period of creative intensity in a world on the cusp of change.

Richard Thompson is a world-celebrated and influential guitarist, singer, and songwriter. His widely beloved early work within the band Fairport Convention revived British folk traditions. His albums and performances with Linda Thompson are legendary. He continues to write and perform classic songs and albums and tour widely.

Alec Wightman’s passion and knowledge of music, particularly rock and roll, runs long and deep. By day, Alec is a partner in the national law firm, BakerHostetler. But during his free time, he promotes national act singer-songwriter concerts in Columbus, and he’s been doing that since 1995. He’s also a longtime member of the Rock and Roll Hall of Fame, where he served three years as Chair of the Board. And Alec has his own memoir coming out this month called Music in My Life.