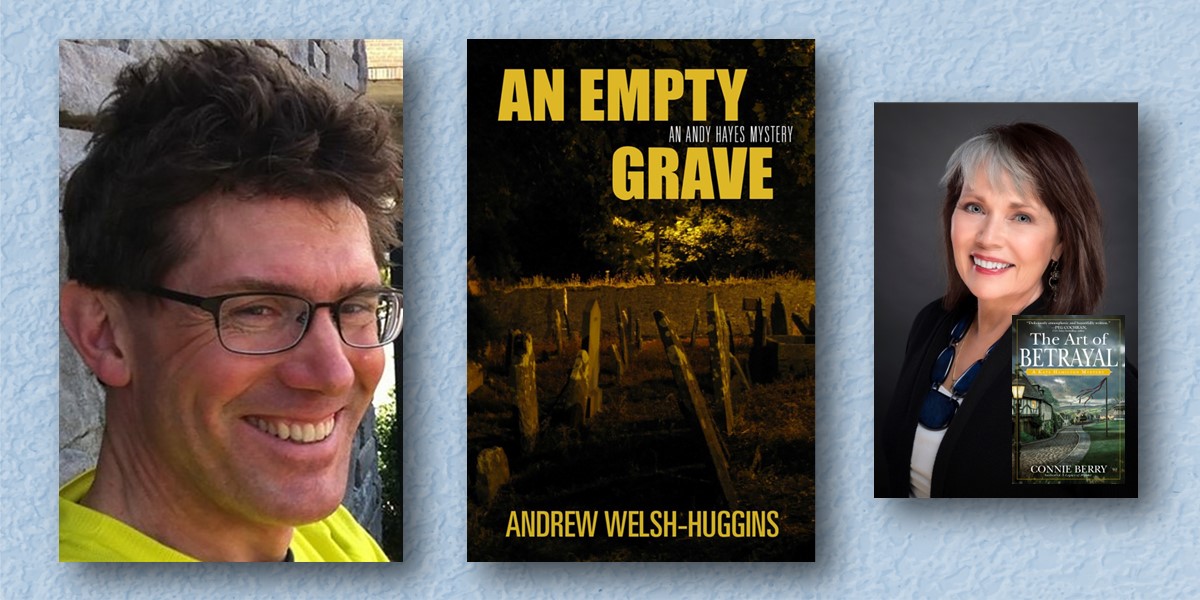 Join two crime writers for a lively discussion about mysteries! Andrew Welsh-Huggins launches his latest Andy Hayes mystery series, An Empty Grave. He will be in conversation with fellow Buckeye Crime Writers member Connie Berry, who recently released the third in her Kate Hamilton mystery series, The Art of Betrayal.

PLEASE NOTE, EVENT GOERS! This program will be Gramercy's first Hybrid Author Event! That means live AND live streamed, so look for a ticket called In-Store Attendance + An Empty Grave, where a limited number of people can register to attend in person. Book signing with both authors will be included! (We ask attendees to arrive by 6:45 pm so everyone is seated and we can begin our live-streaming of this event on time!)

Registration is on Eventbrite for this Zoom Webinar program. A general admission ticket to access the event is $5; a ticket that includes the purchase of either book waives the admission fee. Registration closes at 5:00 pm on the day of the event.

Buckeye Crime Writers is Gramercy’s Community Partner for this conversation.

In An Empty Grave, private investigator Andy Hayes takes the assignment against his better judgment. In 1979, a high-profile burglar shot a cop, was apprehended, and then disappeared without ever being prosecuted. Forty years later, after the wounded cop’s suicide, his son, Preston Campbell, is convinced there’s been a cover-up that allowed his father’s attacker to go free. At first, Hayes dismisses Campbell’s outlandish conspiracy theories. But when a mysterious Cold War connection to the burglar emerges, the investigation heats up, and Hayes discovers a series of deaths that seem to be connected, one way or another, to the missing criminal. Nothing seems to add up, though, and Hayes finds himself hurtling headlong down a decades-old path of deadly secrets. In the midst of cracking the cold case, Hayes has another mystery to solve closer to home: What’s been troubling his younger son, Joe, and why is his ex-wife so eager to have the boy out of her house? Further complicating matters, Hayes learns that another private eye, the captivating but inscrutable Hillary Quinne, is also on the trail of the vanished burglar and needs Hayes’ help. As their professional and personal lives blur, Hayes wonders what he’s gotten himself into, and whether he really wants out.

In Connie Berry's third Kate Hamilton mystery, The Art of Betrayal, antiques dealer Kate Hamilton is spending the month of May in the Suffolk village of Long Barston, enjoying precious time with Detective Inspector Tom Mallory. While attending the May Fair, the annual pageant based on a well-known Anglo-Saxon folktale, a body turns up in the middle of the festivities. Kate is even more shocked when she learns the murder took place in antiquity shop owner Ivor Tweedy's stockroom and a valuable Chinese pottery jar that she had been tasked with finding a buyer for has been stolen. Ivor may be ruined. Insurance won't cover a fraction of the loss. As Tom leads the investigation, Kate begins to see puzzling parallels between the murder and local legends. The more she learns, the more convinced she is that the solution to both crimes lies in the misty depths of Anglo-Saxon history and a generations-old pattern of betrayal. It's up to Kate to unravel this Celtic knot of lies and deception to save Ivor's business.

Andrew Welsh-Huggins is a reporter for the Associated Press in Columbus, Ohio, and the Nero Award–finalist author of six mysteries from Swallow Press featuring Andy Hayes, a former Ohio State and Cleveland Browns quarterback turned private eye. Welsh-Huggins is also the editor of Columbus Noir (Akashic Books) and his short fiction has appeared in publications including Ellery Queen Mystery Magazine, Mystery Weekly, and Mystery Tribune. His nonfiction book No Winners Here Tonight (Ohio University Press) is the definitive history of the death penalty in Ohio.

Connie Berry's dream of becoming an archaeologist ended when she learned there was more to it than discovering the tombs of lost pharaohs. Instead, she created the Kate Hamilton Mystery series, set in the UK and featuring an American antiques dealer with a gift for solving crimes. Besides reading mysteries and writing them, Connie loves history, foreign travel, cute animals, and all things British. She lives in Ohio with her husband and their new puppy, Emmie.

The Art of Betrayal: A Kate Hamilton Mystery (Hardcover)