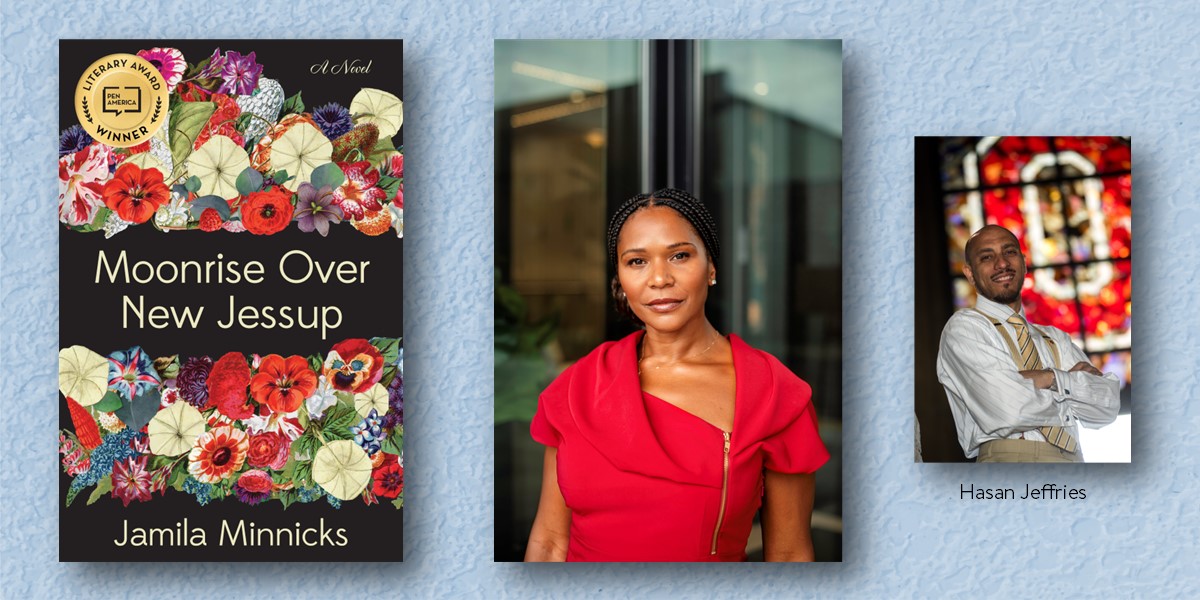 Jamila Minnicks, recipient of the 2021 PEN/Bellwether Prize for Socially Engaged Fiction, will be in conversation with noted Ohio State University civil rights scholar Hasan Jeffries to discuss Minnicks’s debut novel,  Moonrise Over New Jessup,  a thought-provoking and enchanting debut about a Black woman doing whatever it takes to protect all she loves at the beginning of the civil rights movement in Alabama.

Registration is on Eventbrite, closing at 6:00 pm on the day of the event. The purchase of Moonrise Over New Jessup waives the $5 admission fee.

It’s 1957, and after leaving the only home she has ever known, Alice Young steps off the bus into the all-Black town of New Jessup, Alabama, where residents have largely rejected integration as the means for Black social advancement. Instead, they seek to maintain, and fortify, the community they cherish on their “side of the woods.” In this place, Alice falls in love with Raymond Campbell, whose clandestine organizing activities challenge New Jessup’s longstanding status quo and could lead to the young couple’s expulsion—or worse—from the home they both hold dear. But as Raymond continues to push alternatives for enhancing New Jessup’s political power, Alice must find a way to balance her undying support for his underground work with her desire to protect New Jessup from the rising pressure of upheaval from inside, and outside, their side of town.

Jamila Minnicks’s debut novel is both a celebration of Black joy and a timely examination of the opposing viewpoints that attended desegregation in America.

Jamila Minnicks is the author of Moonrise Over New Jessup, the 2021 winner of the PEN/Bellwether Prize for Socially Engaged Fiction. Her work is also published in CRAFT Literary Magazine, The Write Launch, and The Silent World in Her Vase. Her piece, Politics of Distraction, was nominated for the Pushcart Prize. She is a graduate of the University of Michigan, the Howard University School of Law, and Georgetown University. She lives in Washington, DC.

Hasan Jeffries is a professor at The Ohio State University Department of History and an expert in African American and civil rights-era history. Dr. Jeffries, who frequently teaches graduate and undergraduate seminars on the Civil Rights and Black Power Movement, has received several fellowships in support of his research, including a Ford Foundation Post-Doctoral Fellowship. He has also regularly shared his expert knowledge of African American history and contemporary black politics with the general public through lectures, teacher workshops, and frequent media appearances. Jeffries is the author of Bloody Lowndes: Civil Rights and Black Power in Alabama’s Black Belt. He is also the editor of Understanding and Teaching the Civil Rights Movement, a collection of essays on how to teach the Civil Rights Movement written by leading civil rights scholars and teachers.