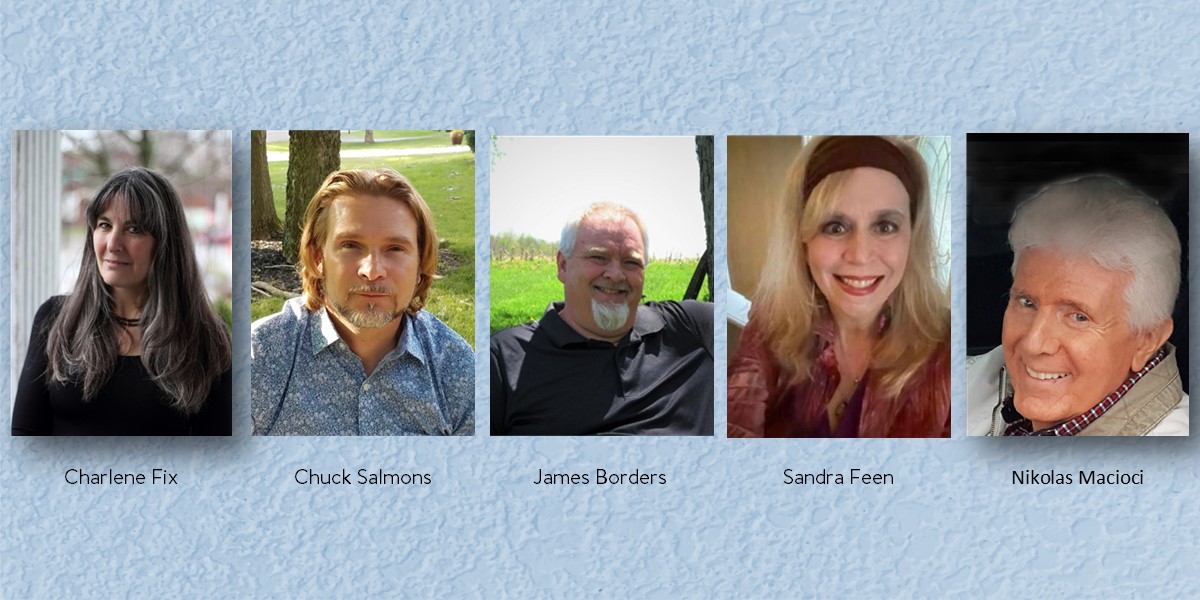 Join five local poets—Charlene Fix, Chuck Salmons, James Borders, Sandra Feen, and R. Nikolas Macioci—in an evening of readings and conversation!
Registration for this free event is on Eventbrite, closing at 6 pm the night of the event.
THE OHIO POETRY ASSOCIATION is Gramercy’s Community Partner for this program.

Charlene Fix is the author of five volumes of poetry, two chapbooks, and a nonfiction book, Harpo Marx as Trickster, comparing the most magical Marx brother to tricksters from folklore, myth, and legend. Charlene is an Emeritus Professor of English at Columbus College of Art and Design, and she co-coordinates Hospital Poets at the Ohio State University Medical Center and Nationwide Children’s Hospital.

Chuck Salmons is the immediate past president of Ohio Poetry Association. His poems have appeared in numerous journals and anthologies, including Pudding Magazine, The Fib Review, Evening Street Review, The Ekphrastic Review, and Poets to Come: A Poetry Anthology in celebration of Walt Whitman’s Bicentennial. He has two chapbooks and is recipient of a 2018 Ohio Arts Council Individual Excellence Award for poetry. Chuck performs with the poetry trio Concrete Wink.

James Borders is a poet, husband, grandfather, and recovering curmudgeon. After decades of writing pithy satirical poems and grocery lists, he decided to get serious about poetry which has resulted in his first book, Resurrecting Onions, which shares the poet’s struggles helping others suffering abuse to know recovery and a better life is possible and can break the cycle of victimization. James is a member of Bistro Poetry and the host of Peripatetic Poets based in Columbus, Ohio. Recent poems have appeared in Meniscus Literary Magazine and Madness Muse Press.

Photographer Sandra Feen was inducted as the 2022-2024 Ohio Beat Poet Laureate by the National Beat Poetry Foundation. She is the author of three poetry collections, one of which (Fragile Capacities: School Poems) was nominated for the Ohioana Book Award and highlights her 32-year teaching career in an urban school system. The poem “Palms Monday” was nominated for a Pushcart Prize. She won Heavy Feather Review’s second-annual Zachary Doss Friends in Letters Fellowship, with Rikki Santer, for their poetry collaboration titled, Emotion Bus.

R. Nikolas Macioci is the author of sixteen poetry collections, most recently Gods of Disharmony and The Only Country I’ve Been Dead In. His poems have been published here and abroad in magazines and journals, including Chiron, Concho River Review, The Bombay Review, The Raven’s Perch, and West Trade Review. Nik earned a PhD from The Ohio State University, and for thirty years taught for the Columbus City Schools.

Taking a Walk in My Animal Hat: Poems (Harmony) (Paperback)

The Only Country I've Been Dead In (Paperback)