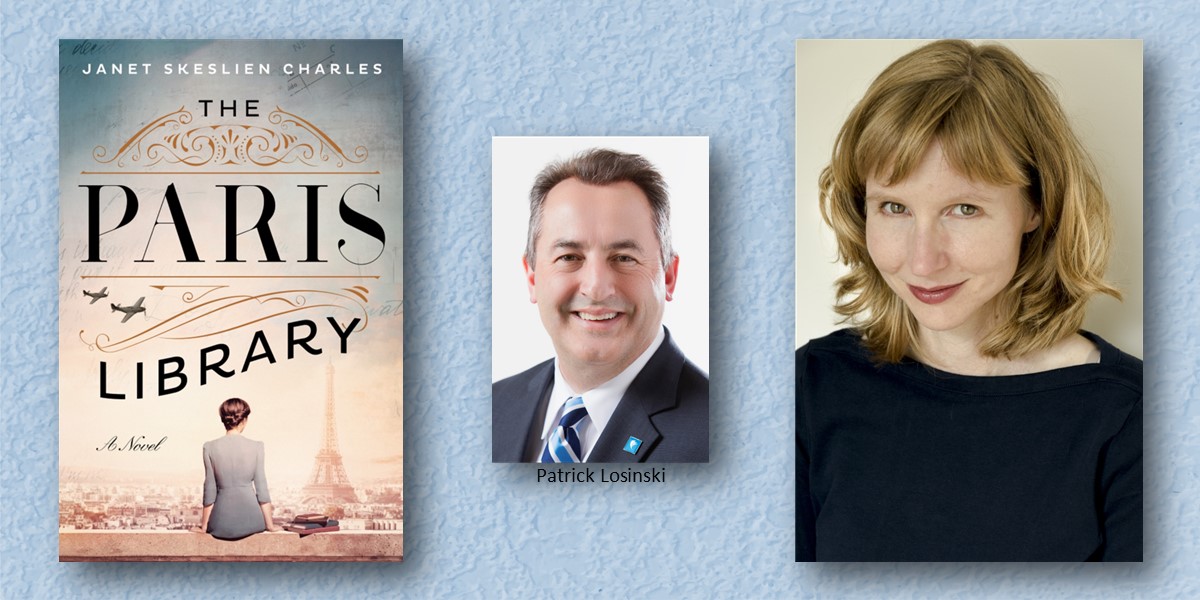 Award-winning author Janet Skeslien Charles will join Gramercy Book Club participants after the discussion of her latest novel, The Paris Library, based on the true World War II story of the heroic librarians at the American Library in Paris. Columbus’ number one librarian, the CEO of Columbus Metropolitan Library Pat Losinski will moderate the group discussion and interview with Janet.

Registration for this LIVE! book club discussion is on Eventbrite, where you will receive login information and full instructions. A general admission ticket to access the event is $5. A ticket that includes a copy of The Paris Library and a signed bookplate to the first 50 patrons (available any time after its February 9th publication) waives the fee and is $30. Please note that registration closes at 5 pm on the day of the program.

Columbus Metropolitan Library is a Community Partner for this book club program.

Paris, 1939: Young and ambitious Odile Souchet has it all: her handsome police officer beau and a dream job at the American Library in Paris. When the Nazis march into Paris, Odile stands to lose everything she holds dear, including her beloved library. Together with her fellow librarians, Odile joins the Resistance with the best weapons she has: books. But when the war finally ends, instead of freedom, Odile tastes the bitter sting of unspeakable betrayal.

Montana, 1983: Lily is a lonely teenager looking for adventure in small-town Montana. Her interest is piqued by her solitary, elderly neighbor. As Lily uncovers more about her neighbor’s mysterious past, she finds that they share a love of language, the same longings, and the same intense jealousy, never suspecting that a dark secret from the past connects them.

A novel tailor-made for those who cherish books and libraries, The Paris Library is the unforgettable story of romance, friendship, family, and the power of literature to bring us together.

Janet Skeslien Charles is the award-winning author of Moonlight in Odessa, which was published in ten languages. Her shorter work has appeared in revues such as Slice and Montana Noir. Janet first became interested in the incredible true story of the librarians who stood up to the Nazi “Book Protector” when she worked as the program’s manager at the American Library in Paris. Her novel The Paris Library will be published in seventeen countries. She divides her time between Montana and Paris.

Since 2002, Pat Losinski has served as Chief Executive Officer of the Columbus Metropolitan Library. Prior to joining CML, Pat was executive director of Pikes Peak Library District in Colorado Springs. He has worked for public library systems in Wisconsin, Illinois and Ohio, and served on the state library boards in Illinois and Colorado. He is a former board chair of the Urban Libraries Council and a past member of the governing board of the International Federation of Library Associations.

The Paris Library: A Novel (Hardcover)