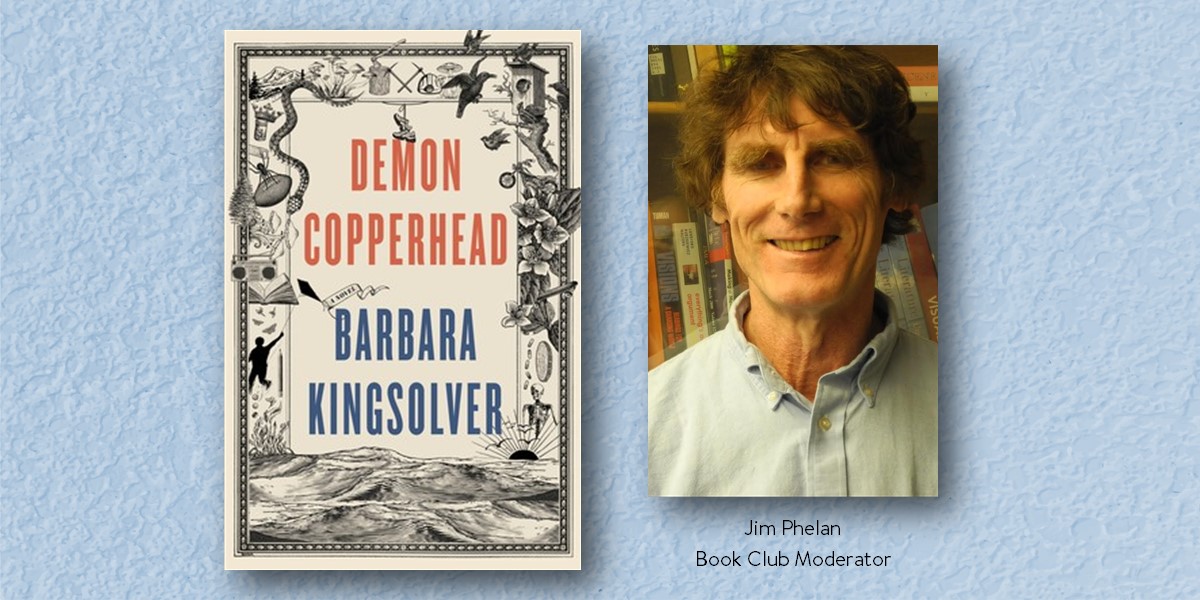 From award-winning and bestselling author Barbara Kingsolver, comes Demon Copperhead, Gramercy’s Book Club selection for January 2023. A powerful novel which enthralls, compels, and captures the heart as it evokes a young hero’s unforgettable journey to maturity, the book discussion will be facilitated by Ohio State University distinguished literary scholar and author Jim Phelan.

Registration is on Eventbrite. A ticket to this program includes a copy of Demon Copperhead at a 15% discount. It is strongly encouraged that registrants read the book prior to the program.

THE OHIO STATE UNIVERSITY ENGLISH DEPARTMENT is Gramercy’s Community Partner for this program.

Demon Copperhead is set in the mountains of southern Appalachia. It’s the story of a boy born to a teenaged single mother in a single-wide trailer, with no assets beyond his dead father’s good looks and copper-colored hair, a caustic wit, and a fierce talent for survival. In a plot that never pauses for breath, relayed in his own unsparing voice, he braves the modern perils of foster care, child labor, derelict schools, athletic success, addiction, disastrous loves, and crushing losses. Through all of it, he reckons with his own invisibility in a popular culture where even the superheroes have abandoned rural people in favor of cities.

Many generations ago, Charles Dickens wrote David Copperfield from his experience as a survivor of institutional poverty and its damages to children in his society. Those problems have yet to be solved in ours. Dickens is not a prerequisite for readers of this novel, but he provided its inspiration. In transposing a Victorian epic novel to the contemporary American South, Barbara Kingsolver enlists Dickens’ anger and compassion, and above all, his faith in the transformative powers of a good story. Demon Copperhead speaks for a new generation of lost boys, and all those born into beautiful, cursed places they can’t imagine leaving behind.

Jim Phelan is Distinguished University Professor and Arts and Humanities Distinguished Professor in the Department of English at The Ohio State University. He teaches and writes about narrative theory, the medical humanities, and the English and American novel, especially from modernism to the present. Jim also serves as Director of Project Narrative at Ohio State, a cluster of faculty, visiting scholars, and graduate students who work on narrative and narrative theory. He is the author or co-author of eleven books and editor or co-editor of another eleven, as well as approximately 180 essays. Since 1992, he has been the editor of Narrative, the journal of the International Society for the Study of Narrative, where he was recently named the recipient of its Wayne C. Booth Lifetime Achievement Award.