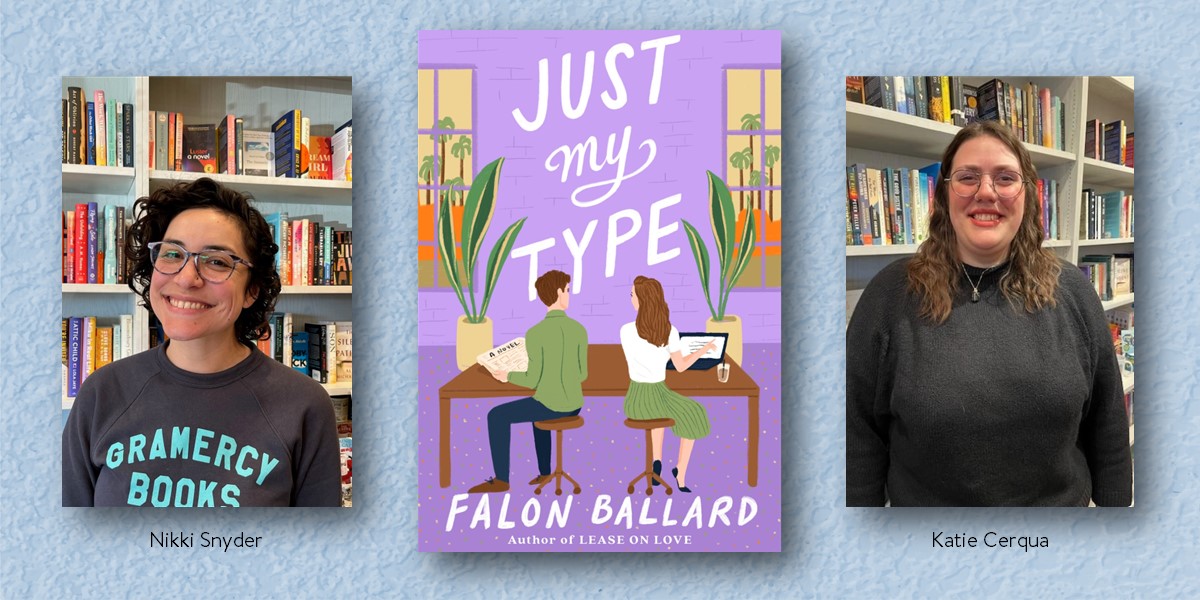 Join booksellers Katie Cerqua and Nikki Snyder who will facilitate a book discussion of Falon Ballard’s, Just My Type, a heartwarming and hilarious new romantic comedy from the author of Lease on Love! A social hour at Kittie’s will precede the program at 5:00 pm, with the book discussion beginning at 6:15 pm.

Registration is on Eventbrite. A ticket to this program includes a copy of Just My Type at a 15% discount and a beverage at Kittie’s. It is strongly encouraged that registrants read the book prior to the program.

To win the job of her dreams, a relationship-prone journalist needs to learn how to stay single! Lana Parker is an expert girlfriend. After a disastrous breakup with her high school boyfriend, she's bounced from long-term relationship to long-term relationship and even works as the dating and relationships columnist for one of Los Angeles's trendiest websites. But when Lana suddenly finds herself single, she's ready to take a break, both personally and professionally. That is, until her high school ex, Seth Carson, takes an assignment at Lana's site. Having spent years traveling the world as a freelance journalist, Seth's finally ready to put down roots. Seth and Lana's chemistry is just as combative—and undeniable—as ever and quickly leads to a competition that could shape both of their careers. Pitted against each other by Lana's boss, they are each tasked with writing an article series that goes against their usual dating type: Lana needs to write about being single and staying single, while Seth must learn to settle down and become boyfriend material. Whoever's series is most popular winds a highly coveted dream job. But when the two square off, it's not only their careers on the line—it’s also their hearts.

Growing up with a mother who was a librarian, Katie Cerqua’s interest in reading began at a young age. After working at a college Barnes and Noble, Katie wanted to work at an independent bookstore and spent two years working at Gramercy Books as a bookseller before being promoted to Assistant Store Manager!

Nikki Snyder has always loved the power of books. She joined the Gramercy team when the doors opened in 2016, and has loved being a bookseller through the years, now serving as Digital Media Manager! While Nikki loves all things fiction and romance, she gravitates toward mysteries, thrillers, and fantasies grounded in reality.