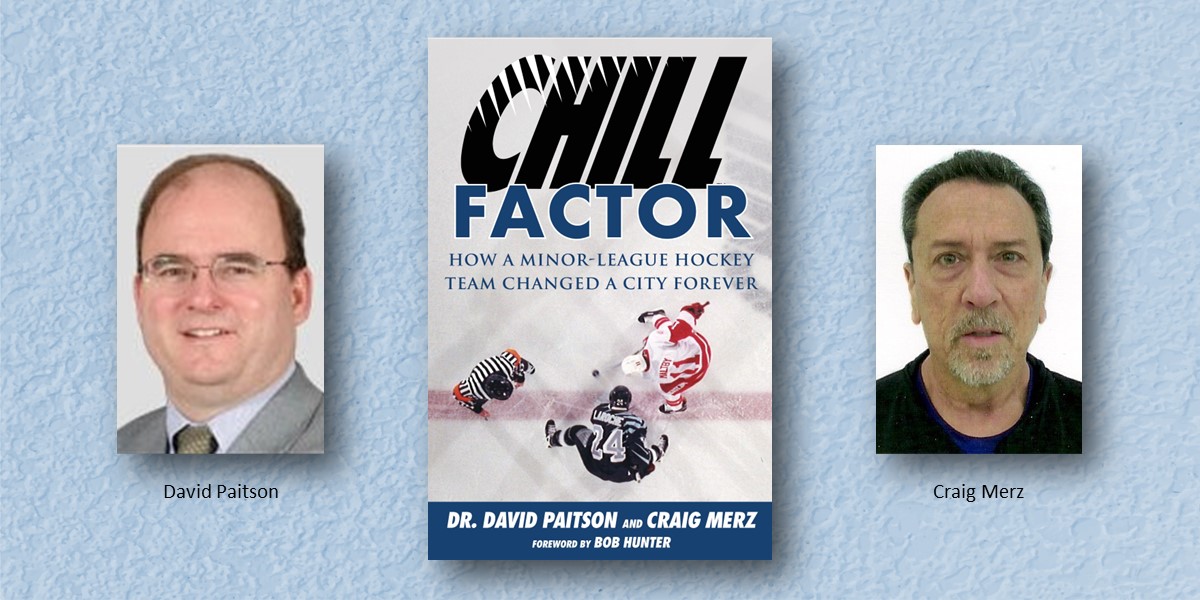 Join Sports Executive David Paitson and Sportswriter Craig Merz, authors of Chill Factor, to learn how a minor-league hockey team helped bring the NHL to Columbus and grew the interest in hockey in Ohio.

Registration is on Eventbrite. A general admission ticket to access the event is $5; a ticket that includes CHILL FACTOR waives the admission fee and is $18. Registration closes at 5:00 pm on the day of the event.

The city of Columbus, Ohio, had always struggled to support any professional sports franchise. It’s a town where Ohio State University reigns supreme, and everything else is less important. That was until 1991, when the Columbus Chill, a minor-league hockey franchise, arrived. Using Veeckian marketing tactics and on-ice shenanigans, the Chill became the talk of the city and gained a religious local fan base.

Based on the success of the Chill, from 1991–99, the city of Columbus was awarded with the Columbus Blue Jackets in 2000, the city’s own NHL franchise.

Chill Factor follows the wild ride through the eyes of team president and general manager David Paitson, from the early formation of the minor-league franchise through the decision to rattle the status quo by going to the edge and beyond with a marketing and promotional plan that was both edgy and controversial. The success of the Chill after their first season gave the organization the impetus to challenge local civic and business leaders to build a world-class arena and emerge from the shadow of OSU. There were setbacks and triumphs on and off the ice, and eventually the realization that the Columbus of today would not be possible without the aid of the Chill.

Chill Factor takes readers into the front office and onto the rink, giving every angle of how a small town was able to get behind a working-class team that fought both on and off the ice. This thrilling account will appeal to those who remember the Chill’s reign, as well as those who enjoy seeing the underdog climb the ladder to sports supremacy.

Dr. David Paitson was the president and general manager of the Columbus Chill from 1991–98 and a career sports business executive. Paitson has worked in public relations and marketing capacities with the Indiana Pacers (NBA), with the Columbus Blue Jackets (NHL), and as president of the Columbus Destroyers (AFL). He currently works as director of athletics at Lake Superior State University. He and his wife, Lauren, currently reside in Sault Ste. Marie, Michigan

Craig Merz, a lifelong Columbus resident, has witnessed the evolving sports scene there from the stands and the press box, including a quarter century of reporting for the Columbus Dispatch. He has covered the Stanley Cup Final, NHL All-Star Game, NHL Draft, and the NCAA Frozen Four. Merz has been an NHL.com independent correspondent covering the Columbus Blue Jackets since 2013, and is a freelance reporter for the Associated Press, Buckeye Sports Bulletin, and Field Level Media, among others.