Kerry Rea, author of LUCY ON THE WILD SIDE, kicks off Gramercy’s Romance Book Club! 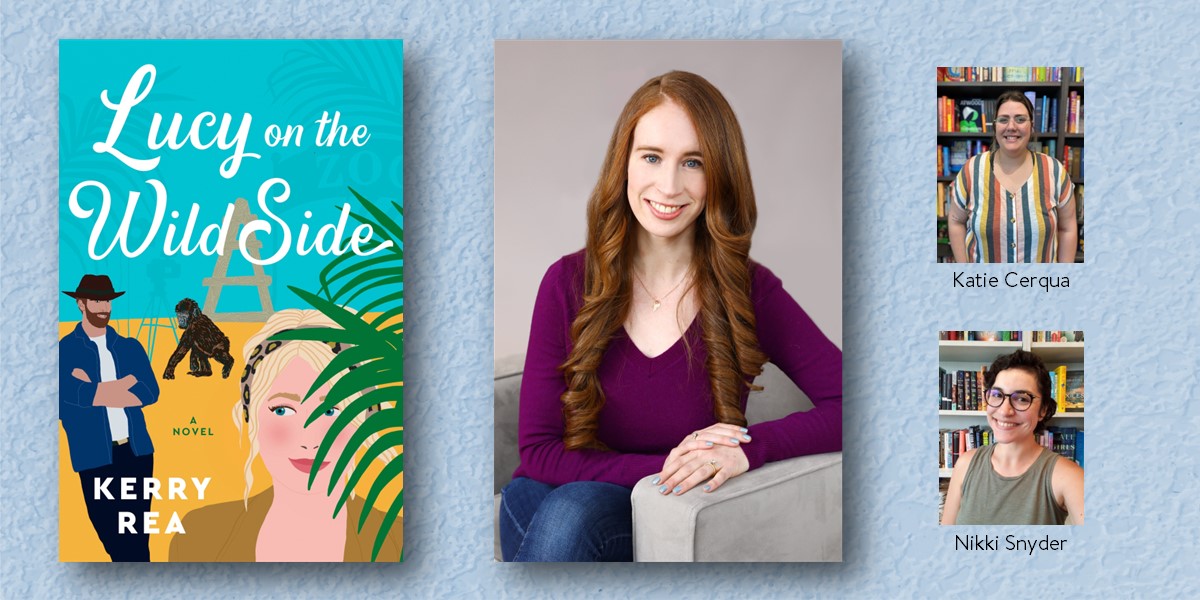 Join romance novelist Kerry Rea to discuss her recent novel, Lucy on the Wild Side, at Gramercy’s first Romance Book Club. The discussion will be facilitated by booksellers Katie Cerqua and Nikki Snyder, romance book reading experts! A social hour at Kittie’s will precede the program at 5:00 pm, with the book discussion beginning at 6:15 pm.

A ticket to this program includes a copy of Lucy on the Wild Side at a 15% discount and a beverage at Kittie’s. It is strongly encouraged that registrants read the book prior to the program.

A zookeeper always on the fringe learns to go after her wildest dreams—including a certain television star—in this charming and laugh-out-loud romantic comedy by the author of The Wedding Ringer.

Lucy Rourke has two great loves in her life: the gorilla troop she cares for as a primatologist and the laundry list of reality TV shows she watches to escape the fact that her actual love life doesn’t exist. And like a reality contestant gunning for the final rose, Lucy’s laser-focused on one thing: getting promoted to head keeper. So, when a wildlife docuseries hosted by hotshot TV personality Kai Bridges chooses her zoo as its summer filming location, she sees an opportunity to showcase her beloved gorillas to the world and land a starring role in her department.

When Kai and his film crew arrive, however, it's obvious to Lucy that Kai cares more about sky-high ratings than the gorillas, and he considers her a camera-averse know-it-all whose wardrobe consists entirely of khaki. But she’s surprised to discover there’s more to him than his rugged good looks and cheesy catchphrases...and that maybe a promotion isn’t the only thing she wants. But when secrets from their pasts threaten to complicate everything, Lucy discovers that happiness and success aren’t the same thing—and that finding joy just might mean getting a little wild.

Kerry Rea is a 2017 and 2019 #PitchWars mentee. Her work has appeared in Seventeen magazine. She lives in Columbus, Ohio, with her husband and four dogs.

Growing up with a mother who was a librarian, Katie Cerqua’s interest in reading began at a young age. After working at a college Barnes and Noble, Katie wanted to work at an independent bookstore and spent two years working at Gramercy Books as a bookseller before being promoted to Assistant Store Manager!

Nikki Snyder has always loved the power of books. She joined the Gramercy team when the doors opened in 2016, and has loved being a bookseller through the years, now serving as Digital Media Manager! While Nikki loves all things fiction and romance, she gravitates toward mysteries, thrillers, and fantasies grounded in reality.

Lucy on the Wild Side (Paperback)