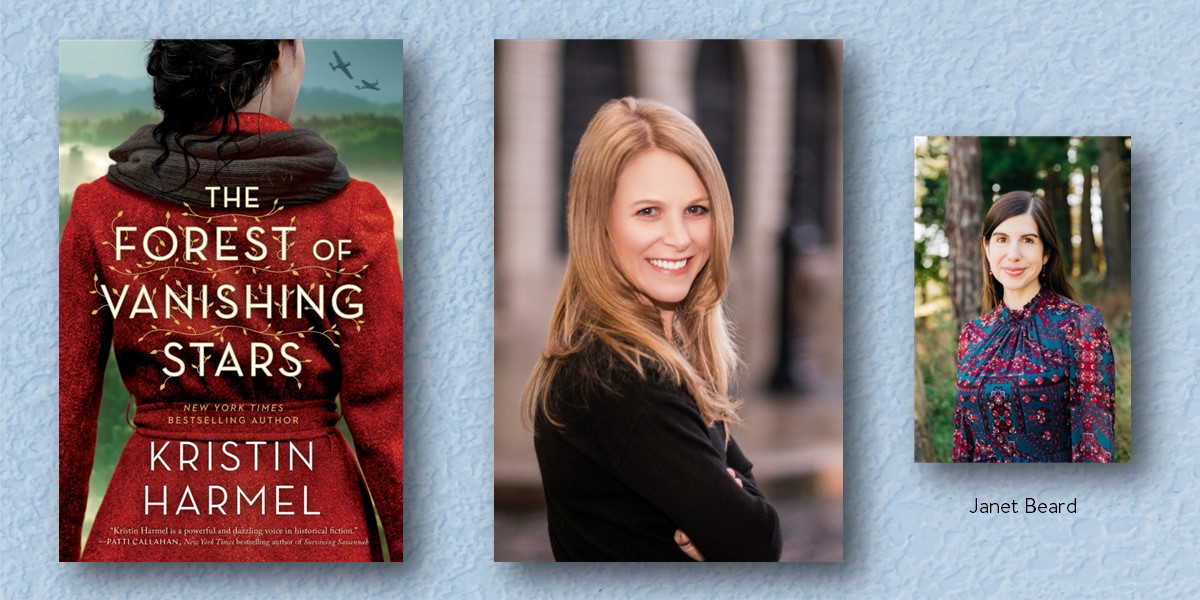 Join New York Times bestselling author of the “heart-stopping tale of survival and heroism” (People) The Book of Lost Names, Kristin Harmel, who returns for the launch of The Forest of Vanishing Stars, her evocative coming-of-age World War II story about a young woman who uses her knowledge of the wilderness to help Jewish refugees escape the Nazis, inspired by true events. Kristin will be in conversation with fellow historical novelist Janet Beard.

Registration for this author program is on Eventbrite. A general admission ticket to access the event is $5. A ticket that includes a copy of The Forest of Vanishing Stars waives the fee and is $30 with tax. Please note that registration closes at 5 pm on the day of the program.

After being stolen from her wealthy German parents and raised in the unforgiving wilderness of eastern Europe, a young woman finds herself alone in 1941 after her kidnapper dies. Her solitary existence is interrupted, however, when she happens upon a group of Jews fleeing the Nazi terror. Stunned to learn what’s happening in the outside world, she vows to teach the group all she can about surviving in the forest—and in turn, they teach her some surprising lessons about opening her heart after years of isolation. But when she is betrayed and escapes into a German-occupied village, her past and present come together in a shocking collision that could change everything.

Inspired by incredible true stories of survival against staggering odds, and suffused with the journey-from-the-wilderness elements that made Where the Crawdads Sing a worldwide phenomenon, The Forest of Vanishing Stars is a heart-wrenching and suspenseful novel from the #1 internationally bestselling author whose writing has been hailed as “sweeping and magnificent” (Fiona Davis, New York Times bestselling author), “immersive and evocative” (Publishers Weekly), and “gripping” (Tampa Bay Times).

Kristin Harmel is the New York Times bestselling author of a dozen novels including The Book of Lost Names, The Winemaker’s Wife, The Room on Rue Amélie, and The Sweetness of Forgetting. She is also the cofounder and cohost of the popular web series, Friends and Fiction. She lives in Orlando, Florida.

Born and raised in East Tennessee, Janet Beard moved to New York to study screenwriting at NYU and went on to earn an MFA in creative writing from The New School. Her first novel, Beneath the Pines, was published in 2008, and her follow-up, The Atomic City Girls became an international bestseller 2018. Janet's latest novel, The Ballad of Laurel Springs, will be released in October of 2021. Janet has lived and worked in Australia, England, Boston, and Columbus, Ohio, where she is currently raising a daughter and working on a new novel.

The Forest of Vanishing Stars: A Novel (Hardcover)