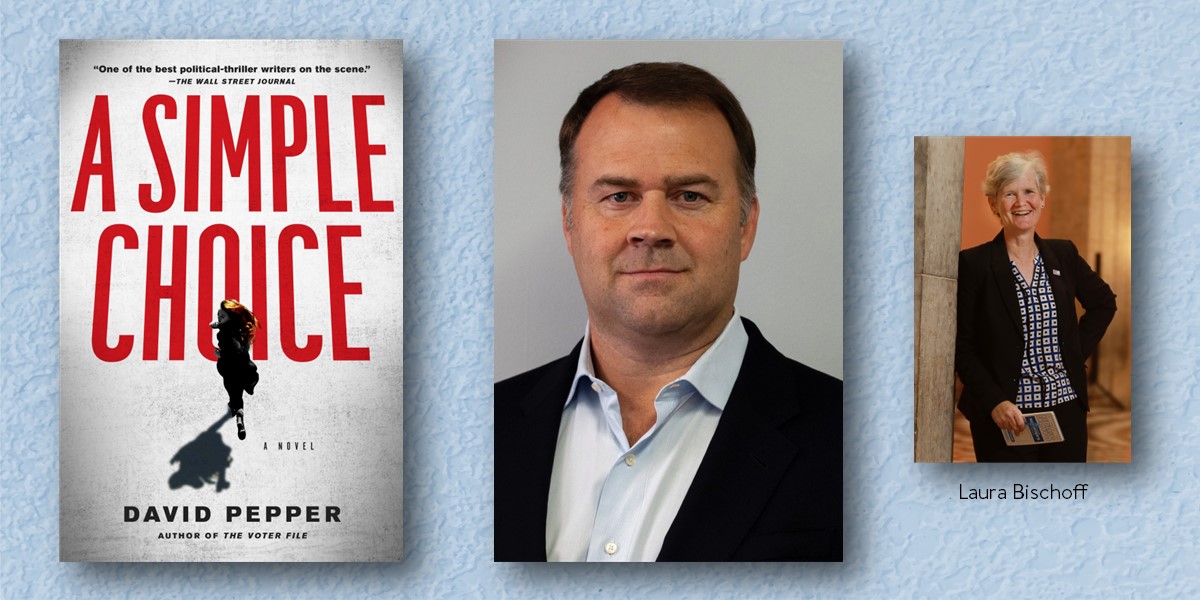 Registration for this in-person event is on Eventbrite, closing at 6:00 pm on the day of the event. The purchase of A Simple Choice when registering waives the $5 admission fee.

When one of the nation’s most prestigious senators jumps from a cliff in Maine, it is no surprise that the political elite and the media flock to the story, determined to uncover what has happened--and whether foul play was involved. Palmer Knight, a fast-rising TV news correspondent, is sent to cover the mysterious death, and finds himself embroiled in a plot that goes far beyond the Senate and onto the global stage.

Meanwhile, Army veteran and former Supreme Court clerk Amity Jones thought she had left the fast lane behind when she moved to Ohio to care for her cancer-stricken mother. But her dogged pursuit of a local medical mystery places her back to the world of politics, and ultimately into Palmer's investigation of the senator’s death. The unlikely duo, brought together by seemingly unconnected events, soon find themselves enmeshed in a political conspiracy that reaches the highest levels of power, and places their lives—and many others—in terrible danger.

David Pepper is the author of The Voter File, The People's House, and The Wingman, all of which feature Jack Sharpe. Pepper earned his B.A. from Yale University and his J.D. from Yale Law School. He has clerked for a judge on the United States Court of Appeals, served in local elected office in Ohio, worked for major law firms, and taught election and voting rights law. Prior to law school, Pepper worked in St. Petersburg, Russia, for the Washington-based Center for Strategic and International Studies. In 2015, he was unanimously elected Chairman of the Democratic Party of Ohio.

Laura Bischoff covers politics and state government for the USA Today Network Ohio bureau, which serves Gannett’s 21 newspapers across the state. She won first place in Explanatory Reporting for 2021, Best Investigative Reporting for 2020 and Best News Writer for 2019 in the Ohio AP contests. Prior to joining Gannett, Bischoff spent nearly 26 years reporting for the Dayton Daily News. She is a graduate of the University of Michigan and lives in suburban Columbus with her husband. They have two adult kids.