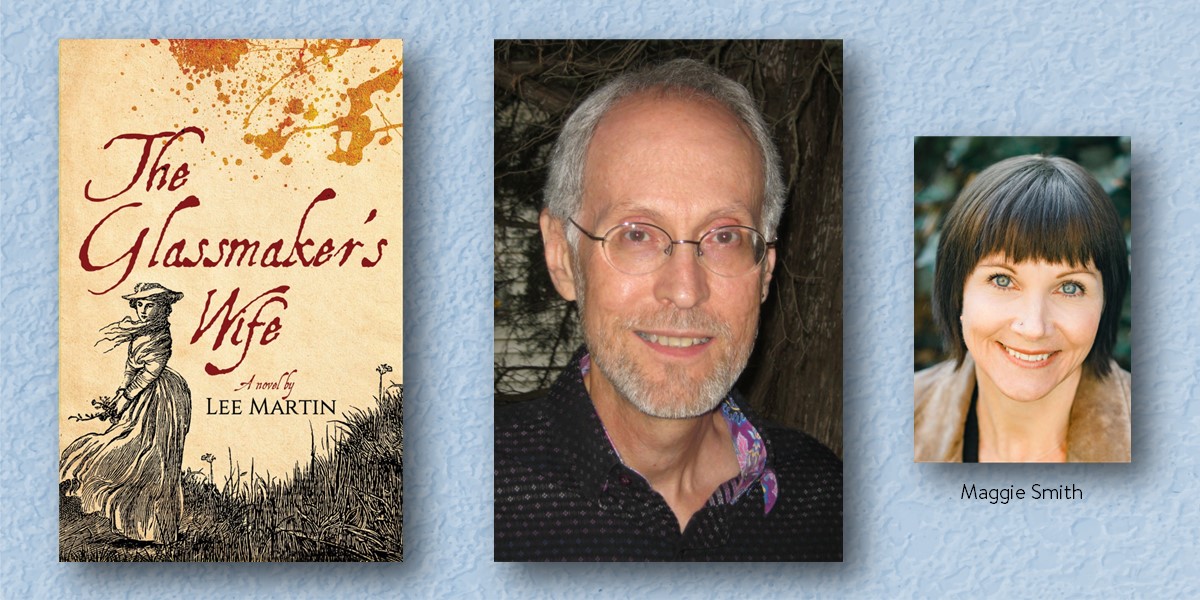 Pulitzer Prize-finalist Lee Martin launches a historical crime novel inspired by true events, The Glassmaker’s Wife, a tale that reveals the contradictions and imperfections of the human heart. He will be in conversation with bestselling author Maggie Smith.

Registration for this in-person event is on Eventbrite. The purchase of The Glassmaker’s Wife waives the $5 admission fee. Registration closes at 6 pm the day of the event.
THE OHIO STATE UNIVERSITY CREATIVE WRITING PROGRAM is Gramercy’s Community Partner for this program.

In August of 1844, a man named Leonard Reed takes violently ill at his home near Heathsville, Illinois, and four days later he is dead. The cause? Arsenic poisoning.

The suspect? His wife, Betsey.

The chief witnesses against her? A hired girl, Eveline Deal, and the local apothecary, James Logan. The evidence? Eveline claims she saw Betsey put a pinch of white powder in Leonard’s coffee.

Betsey Reed, a woman who dabbles in herbal healing, is known about town as a witch. As the gossip and the circumstantial evidence mount, Betsey finds herself under the shadow of a trial—and a noose.

Lee Martin’s latest weaves a tale of a pinch of white powder, a scorched paper, a community hungry for a villain, and a young girl’s first taste of revenge—but above all, of the contradictions and imperfections of the human heart.

In addition to The Glassmaker’s Wife, Lee Martin is the Pulitzer Prize finalist author of The Bright Forever, and five other novels He has also published four memoirs and two short story collections, most recently The Mutual UFO Network, in addition to the craft book, Telling Stories. His fiction and nonfiction have appeared in such places as Harper’s, Ms., The Best American Essays, The Best American Mystery Stories, Creative Nonfiction, The Georgia Review, and The Kenyon Review, among others. He is the winner of the Mary McCarthy Prize in Short Fiction and fellowships from the National Endowment for the Arts and the Ohio Arts Council. A native Midwesterner, he teaches in the MFA Program at The Ohio State University.

Maggie Smith is the author of several books, including Good Bones and the national bestsellers Goldenrod and Keep Moving: Notes on Loss, Creativity, and Change. Her memoir, You Could Make This Place Beautiful, will be published by One Signal/Atria in April 2023. Smith’s poems and essays have appeared in The New York Times, The New Yorker, The Guardian, Paris Review, Tin House, The Washington Post, The Nation, and The Best American Poetry. She is on the MFA faculty of the Naslund-Mann Graduate School of Writing at Spalding University and serves as an editor at large for Kenyon Review.