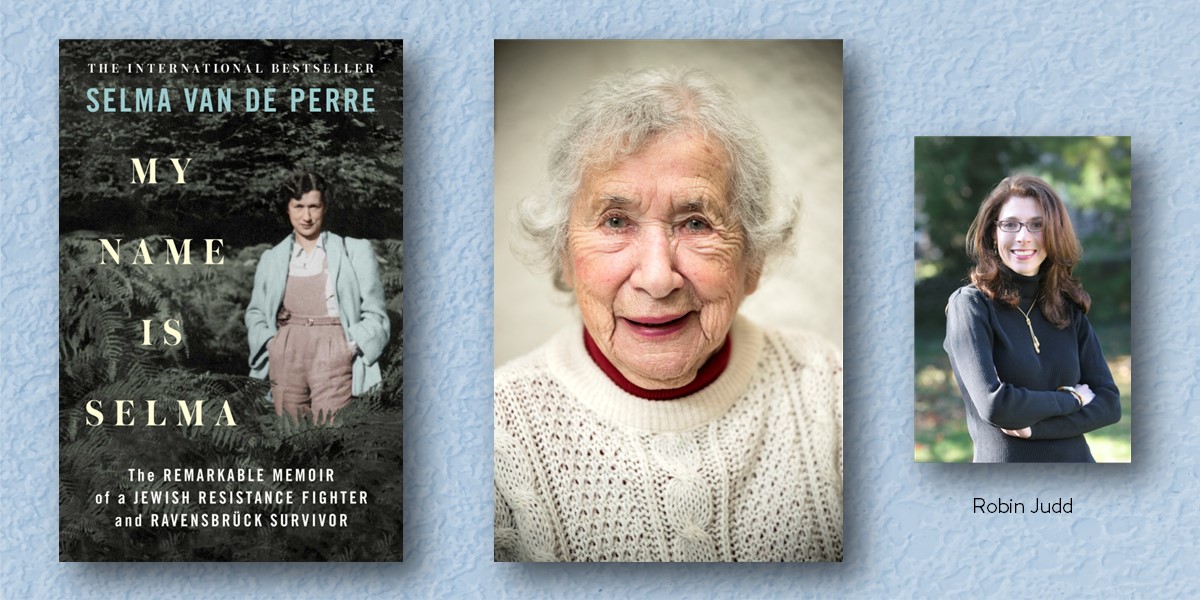 Registration is on Eventbrite. A general admission ticket to access the event is $5; a ticket that includes MY NAME IS SELMAwaives the admission fee and is $29 with tax. Registration closes at 5:00 pm on the day of the event.

Selma van de Perre was seventeen when World War II began. She lived with her parents, two older brothers, and a younger sister in Amsterdam, and until then, being Jewish in the Netherlands had not presented much of an issue. But by 1941 it had become a matter of life or death. On several occasions, Selma barely avoided being rounded up by the Nazis. While her father was summoned to a work camp and eventually hospitalized in a Dutch transition camp, her mother and sister went into hiding—until they were betrayed in June 1943 and sent to Auschwitz. In an act of defiance and with nowhere else to turn, Selma took on an assumed identity, dyed her hair blond, and joined the Resistance movement, using the pseudonym Margareta van der Kuit. For two years “Marga” risked it all. Using a fake ID, and passing as non-Jewish, she traveled around the country and even to Nazi headquarters in Paris, sharing information and delivering papers—doing, as she later explained, what “had to be done.”

But in July 1944 her luck ran out. She was transported to Ravensbrück women’s concentration camp as a political prisoner. Without knowing the fate of her family—her father died in Auschwitz, and her mother and sister were killed in Sobibor—Selma survived by using her alias, pretending to be someone else. It was only after the war ended that she could reclaim her identity and dared to say once again: My name is Selma.

“We were ordinary people plunged into extraordinary circumstances,” Selma writes. Full of hope and courage, this is her story in her own words.

Selma van de Perre was a member of the Dutch resistance organization TD Group during World War II. Shortly after the war she moved to London, where she worked for the BBC and met her future husband, the Belgian journalist Hugo van de Perre. For a number of years, she also worked as foreign correspondent for a Dutch television station. In 1983 Selma van de Perre received the Dutch Resistance Commemoration Cross. She lives in London and has a son.

Robin Judd is an Associate Professor of History at The Ohio State University. She is an expert in modern European and Jewish history. Dr. Judd is the U.S. Editor of The Journal of Modern Jewish Studies and is Vice President of Programming for the Association of Jewish Studies.

My Name Is Selma: The Remarkable Memoir of a Jewish Resistance Fighter and Ravensbrück Survivor (Hardcover)