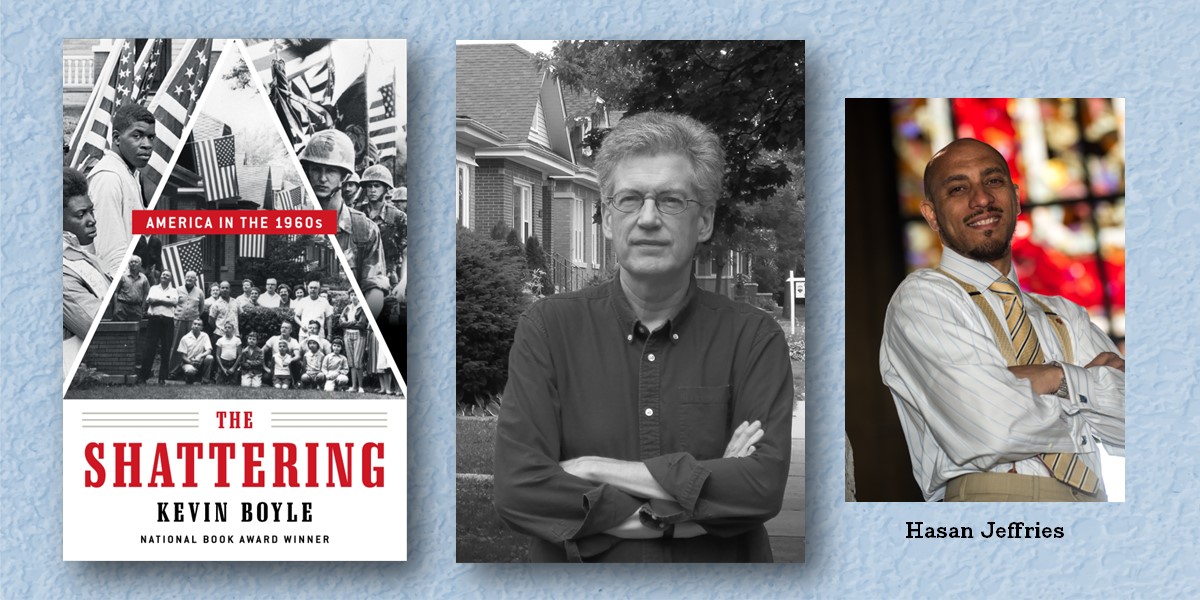 Registration is required on Eventbrite for this free in-person and online event. The in-person program will be held at the Bexley Public Library. Attendees can purchase the book at Gramercy Books, while registering for the in-person event, or at the event itself.

To ensure safety for all, proof of full vaccination or a recent negative Covid-19 test is required to attend the in-person event. Masks are mandated by the City of Bexley, even for those unvaccinated. Seating is limited.

On July 4, 1961, the rising middle-class families of a Chicago neighborhood gathered before their flag-bedecked houses, a confident vision of the American Dream. That vision was shattered over the following decade, its inequities at home and arrogance abroad challenged by powerful civil rights and antiwar movements. Assassinations, social violence, and the blowback of a “silent majority” shredded the American fabric.

Covering the late 1950s through the early 1970s, The Shattering focuses on the period’s fierce conflicts over race, sex, and war. The civil rights movement develops from the grassroots activism of Montgomery and the sit-ins, through the violence of Birmingham and the Edmund Pettus Bridge, to the frustrations of King’s Chicago campaign, a rising Black nationalism, and the Nixon-era politics of busing and the Supreme Court. The Vietnam war unfolds as Cold War policy, high-stakes politics buffeted by powerful popular movements, and searing in-country experience. Americans’ challenges to government regulation of sexuality yield landmark decisions on privacy rights, gay rights, contraception, and abortion.

Boyle captures the inspiring and brutal events of this passionate time with a remarkable empathy that restores the humanity of those making this history. Often, they are everyday people like Elizabeth Eckford, enduring a hostile crowd outside her newly integrated high school in Little Rock, or Estelle Griswold, welcoming her arrest for dispensing birth control information in a Connecticut town. Political leaders also emerge in revealing detail: we track Richard Nixon’s inheritances from Eisenhower and his debt to George Wallace, who forged a message of racism mixed with blue-collar grievance that Nixon imported into Republicanism.

The Shattering illuminates currents that still run through our politics. It is a history for our times.

Kevin Boyle is the author of Arc of Justice, winner of the National Book Award for nonfiction, The Chicago Tribune’s Heartland Prize, the Simon Weisenthal Center’s Tolerance Book Award, and a finalist for the Pulitzer Prize. He has published essays and reviews in The Chicago Tribune, The Washington Post, and The New York Times, among others. He has received fellowships from the Rockefeller, Fulbright, and Guggenheim Foundations, as well as from the American Council of Learned Societies, the National Endowment for the Humanities, and the Andrew Carnegie Corporation. Boyle is the William Smith Mason Professor of American History at Northwestern University and lives in Evanston, Illinois.

Hasan Kwame Jeffries is an esteemed history professor at The Ohio State University and an expert in African American history. He is the editor of Understanding and Teaching the Civil Rights Movement, and author of Bloody Lowndes: Civil Rights and Black Power in Alabama’s Black Belt. He has received several fellowships in support of his research, including a Ford Foundation Post-Doctoral Fellowship. He has also regularly shared his expert knowledge of African American history and contemporary black politics with the general public through lectures, teacher workshops, and frequent media appearances, including his powerful TEDxTalk, “Confronting Hard History.”

The Shattering: America in the 1960s (Hardcover)