Nobel Laureate Kazuo Ishiguro in Conversation with Neil Gaiman to Celebrate the Publication of Ishiguro's Klara and The Sun! 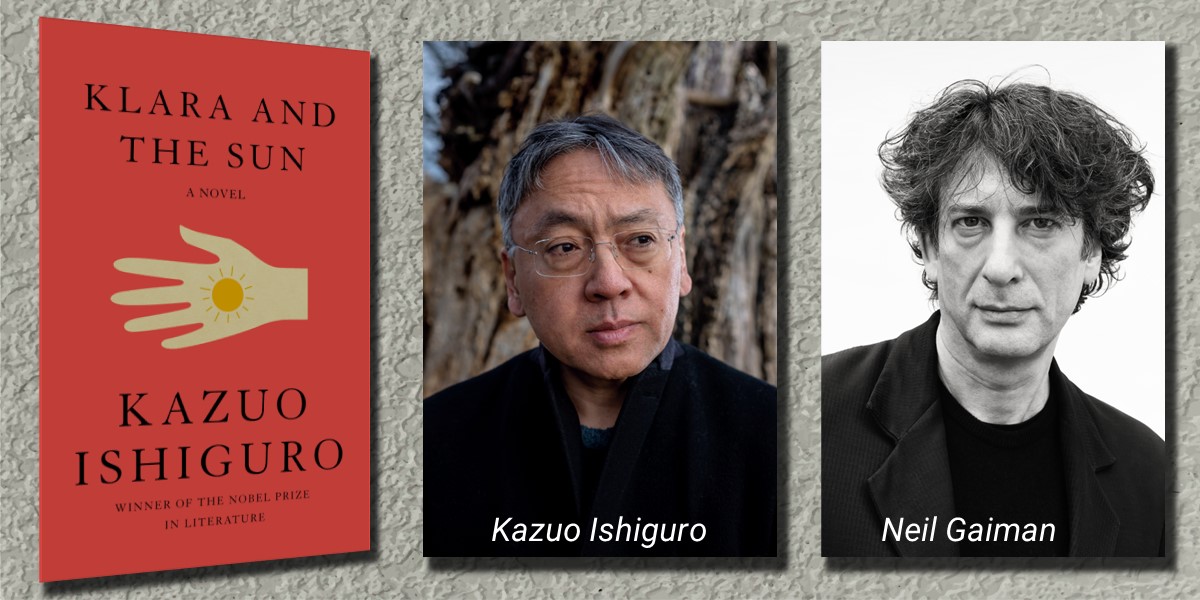 Join Nobel laureate Kazuo Ishiguro—author of Never Let Me Go and the Booker Prize-winning The Remains of the Day—in a live, virtual conversation with award-winning and bestselling author Neil Gaiman to celebrate the publication of Ishiguro’s magnificent new novel, Klara and the Sun (released by Knopf on March 2nd, $28).

Gramercy Books joins Books & Books in Miami and Quail Ridge Books in Raleigh (who will host the program on Zoom Webinar) for this exclusive conversation and book launch. Registration is on Eventbrite. Admission, which includes Ishiguro’s novel, a signed bookplate for the first 250 registrants, and an access link to the program, is $30, which includes tax. Registration closes at 5:00 pm on the day of this event. Registrants will receive the login to access this virtual event 24 hours prior to the program, with later registrants receiving this information on the day of the event at 5:00 pm.

Klara and the Sun, the first novel by Kazuo Ishiguro since he was awarded the Nobel Prize in Literature, tells the story of Klara, an Artificial Friend with outstanding observational qualities, who, from her place in the store, watches carefully the behavior of those who come in to browse, and of those who pass on the street outside. She remains hopeful that a customer will soon choose her.

Klara and the Sun is a thrilling book that offers a look at our changing world through the eyes of an unforgettable narrator, and one that explores the fundamental question: what does it mean to love?

In its award citation in 2017, the Nobel committee described Ishiguro's books as "novels of great emotional force" and said he has "uncovered the abyss beneath our illusory sense of connection with the world."

Kazuo Ishiguro was born in Nagasaki, Japan, in 1954 and moved to Britain at the age of five. His eight previous works of fiction have earned him many honors around the world, including the Nobel Prize in Literature and the Booker Prize. His work has been translated into over fifty languages, and The Remains of the Day and Never Let Me Go, both made into acclaimed films, have each sold more than 2 million copies. He was given a knighthood in 2018 for Services to Literature. He also holds the decorations of Chevalier de l'Ordre des Arts et des Lettres from France and the Order of the Rising Sun, Gold and Silver Star from Japan.

Neil Gaiman is a #1 New York Times bestselling author of books for children and adults whose award-winning titles include Norse Mythology, American Gods, The Graveyard Book, Good Omens (with Terry Pratchett), Coraline, and The Sandman graphic novels. Neil Gaiman is a Goodwill Ambassador for UNHCR and Professor in the Arts at Bard College.

Klara and the Sun: A novel (Hardcover)