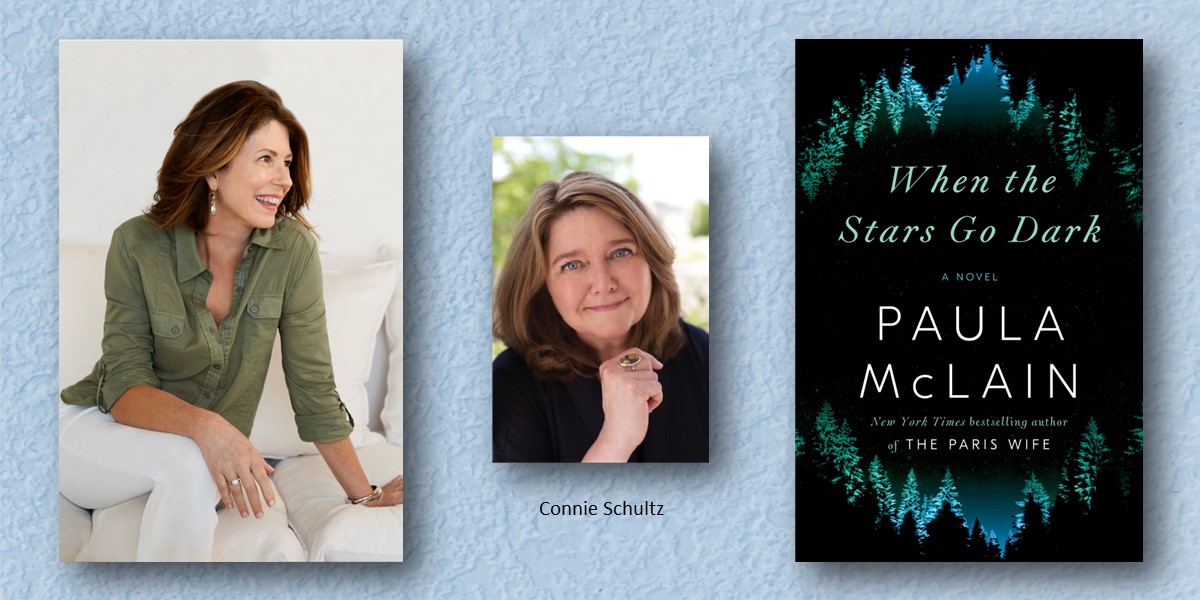 From the New York Times bestselling author of The Paris Wife comes an atmospheric novel of intertwined destinies and heart-wrenching suspense: A detective hiding away from the world. A series of disappearances that reach into her past. Can solving them help her heal?

Join New York Times bestselling author of The Paris Wife, Paula McLain at the launch of her highly lauded crime novel, When the Stars Go Dark, which has been called a poignant, propulsive, and immersive tour de force of literary suspense. Paula will be in conversation with Pulitzer Prize-winning journalist Connie Schultz, author of The Daughters of Erietown: A Novel.

Registration is on Eventbrite. A general admission ticket to access the event is $5; a ticket that includes WHEN THE STARS GO DARK waives the admission fee and is $30 with tax. Registration closes at 5:00 pm on the day of the event.
Ohioana Library is Gramercy's Community Partner for this exclusive program.

Note that the paperback of The Daughters of Erietown will be released on June 1st and can be pre-ordered at Gramercy Books before that date. Registrants can call the store (614-867-5515).

Anna Hart is a seasoned missing persons detective in San Francisco with far too much knowledge of the darkest side of human nature. When tragedy strikes her personal life, Anna, desperate and numb, flees to the Northern California village of Mendocino to grieve. She lived there as a child with her beloved foster parents, and now she believes it might be the only place left for her. Yet the day she arrives, she learns that a local teenage girl has gone missing.

The crime feels frighteningly reminiscent of the most crucial time in Anna’s childhood, when the unsolved murder of a young girl touched Mendocino and changed the community forever. As past and present collide, Anna realizes that she has been led to this moment. The most difficult lessons of her life have given her insight into how victims come into contact with violent predators. As Anna becomes obsessed with saving the missing girl, she must accept that true courage means getting out of her own way and learning to let others in.

Weaving together actual cases of missing persons, trauma theory, and a hint of the metaphysical, this propulsive and deeply affecting novel tells a story of fate, necessary redemption, and what it takes, when the worst happens, to reclaim our lives—and our faith in one another.

Paula McLain is the New York Times bestselling author of the novels Love and Ruin, Circling the Sun, The Paris Wife, and A Ticket to Ride, the memoir Like Family: Growing Up in Other People's Houses, and two collections of poetry. Her writing has appeared in The New York Times, Good Housekeeping, O: The Oprah Magazine, Town & Country, The Guardian, The Huffington Post, and elsewhere. She won the Ohioana Award in fiction in 2012 for The Paris Wife. She lives in Ohio with her family.

Connie Schultz is a Pulitzer Prize winning, nationally syndicated columnist for Creators Syndicate, and Professional in Residence at Kent State University School of Journalism. She is the author of three books published by Random House: Life Happens – And Other Unavoidable Truths, a collection of essays, …and His Lovely Wife, a memoir about her husband Sherrod Brown’s successful 2006 race for the U.S. Senate, and a novel, The Daughters of Erietown, released in June 2020 and a New York Times bestseller. She and her husband have four grown children and eight grandchildren. They live in Cleveland, Ohio with their rescue dogs Franklin and Walter.

When the Stars Go Dark: A Novel (Hardcover)