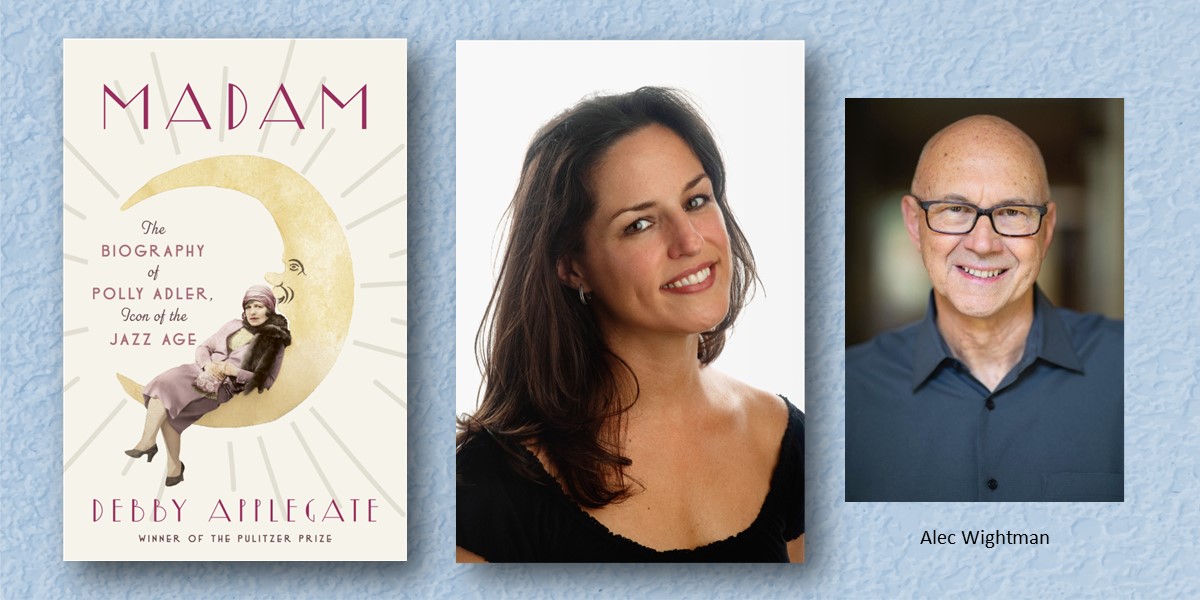 Join the Pulitzer Prize-winning author of The Most Famous Man in America, Debby Applegate, in conversation with Alec Wightman, author of the memoir Music in My Life, to learn more about her compulsively readable and sometimes jaw-dropping story, Madam, about the life of Polly Adler, the notorious “queen of vice” who played hostess to every gangster, politician, writer, sports star and Cafe Society swell worth knowing, and who as much as any single figure helped make the twenties roar. Written in cinematic prose, Madam is a judicious exploration of the dark side of the American Dream, a treat for fiction and nonfiction fans alike.

Registration for this virtual author conversation is on Eventbrite. A general admission ticket to access the event is $5. A ticket that includes the book purchase waives the fee. Please note that registration closes at 5 pm on the day of the program.

Zeppelin Productions and JewishColumbus are Gramercy’s Community Partners for this program.

Simply put: Everybody came to Polly's. Pearl "Polly" Adler (1900-1962) was a diminutive dynamo whose Manhattan brothels in the Roaring Twenties became places not just for men to have the company of women but were key gathering places where the culturati and celebrity elite mingled with high society and with violent figures of the underworld—and had a good time doing it.

As a Jewish immigrant from eastern Europe, Polly Adler's life is a classic American story of success and assimilation that starts like a novel by Henry Roth and then turns into a glittering real-life tale straight out of F. Scott Fitzgerald. She declared her ambition to be "the best goddam madam in all America" and succeeded wildly. Debby Applegate uses Polly's story as the key to unpacking just what made the 1920s the appallingly corrupt yet glamorous and transformational era that it was and how the collision between high and low is the unique ingredient that fuels American culture.

Says T.J. Stiles, author of the Pulitzer Prize-winning The First Tycoon and Custer’s Trials: “From Russia's Pale of Settlement to the Broadway underworld to Hollywood Boulevard, we keep company with Dutch Schultz, the Algonquin Round Table, cops, gamblers, politicians, and Walter Winchell as we follow Adler through her improbable career. Madam rollicks like no biography has rollicked before.”

Debby Applegate is a historian and biographer based in New Haven, CT. Her first book, The Most Famous Man in America: The Biography of Henry Ward Beecher, won the 2007 Pulitzer Prize for biography and was a finalist for the Los Angeles Book Prize and the National Book Critics Circle Award for biography. She is a graduate of Amherst College and was a Sterling Fellow in American Studies at Yale University where she received her Ph.D.

Alec Wightman’s passion and knowledge of music runs long and deep and is detailed in his recent memoir, Music in My Life. By day, Alec is a partner in the national law firm, BakerHostetler. But during his free time, he promotes national act singer-songwriter concerts in Columbus, and he’s been doing that since 1995. He’s also a longtime member of the Rock and Roll Hall of Fame, where he served three years as Chair of the Board.

Madam: The Biography of Polly Adler, Icon of the Jazz Age (Hardcover)