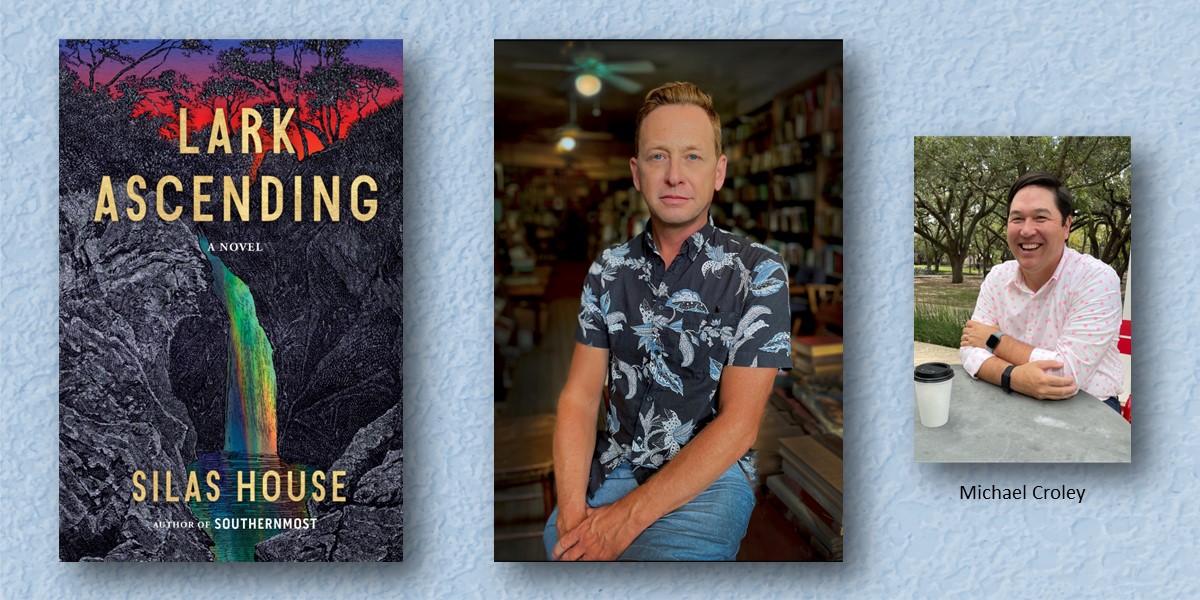 Join New York Times bestselling author Silas House in celebrating the publication of his seventh novel, Lark Ascending, a riveting story of survival and hope. House will be in conversation with Denison scholar and writer Michael Croley.
Registration is on Eventbrite, closing at 6:00 pm on the day of the event. The purchase of Lark Ascending waives the $5 admission fee.
DENISON UNIVERSITY is Gramercy’s Community Partner for this author program.

Lark Ascending tells the story of a young man forced to flee the United States and seek refuge across the Atlantic. It is set in the not-to-distant future.

As fires devastate most of the United States, Lark and his family secure a place on a refugee boat headed to Ireland, the last country not yet overrun by extremists and rumored to be accepting American refugees. But Lark is the only one to survive the trip, and once ashore, he doesn’t find the safe haven he’d hoped for. As he runs for his life, Lark finds an abandoned dog who becomes his closest companion, and then a woman in search of her lost son. Together they form a makeshift family and attempt to reach Glendalough, a place they believe will offer protection. But can any community provide the safety that they seek?

For readers of novels such as Station Eleven, The Dog Stars, and Migrations, Lark Ascending is a moving and unforgettable story of friendship, family, and healing.

Silas House is the New York Times bestselling author of seven novels, one book of creative nonfiction, and three plays. His writing has appeared in The New York Times, the Atlantic, The Advocate, Time, Garden & Gun, and other publications. A former commentator for NPR’s All Things Considered, House is the winner of the Nautilus Award, the Storylines Prize from the NAV/New York Public Library, an E. B. White Honor, and many other awards.

Michael Croley is the author of Any Other Place: Stories, winner of the James Still Award from the Fellowship of Southern Writers and the Weatherford Award. He is also the co-editor (with Jack Shuler) of Midland: Reports from Flyover Country. His reporting, stories, and essays have appeared in Esquire, The New York Times, Bloomberg Businessweek, VQR, The Paris Review, Kenyon Review, LitHub, Narrative, and elsewhere. He is the recipient of grants from the National Endowment for the Arts, the Ohio Arts Council, the Kentucky Arts Council, and the Sewanee Writers’ Conference. He teaches at Denison University and is on the visiting faculty at the Vermont College of Fine Arts.