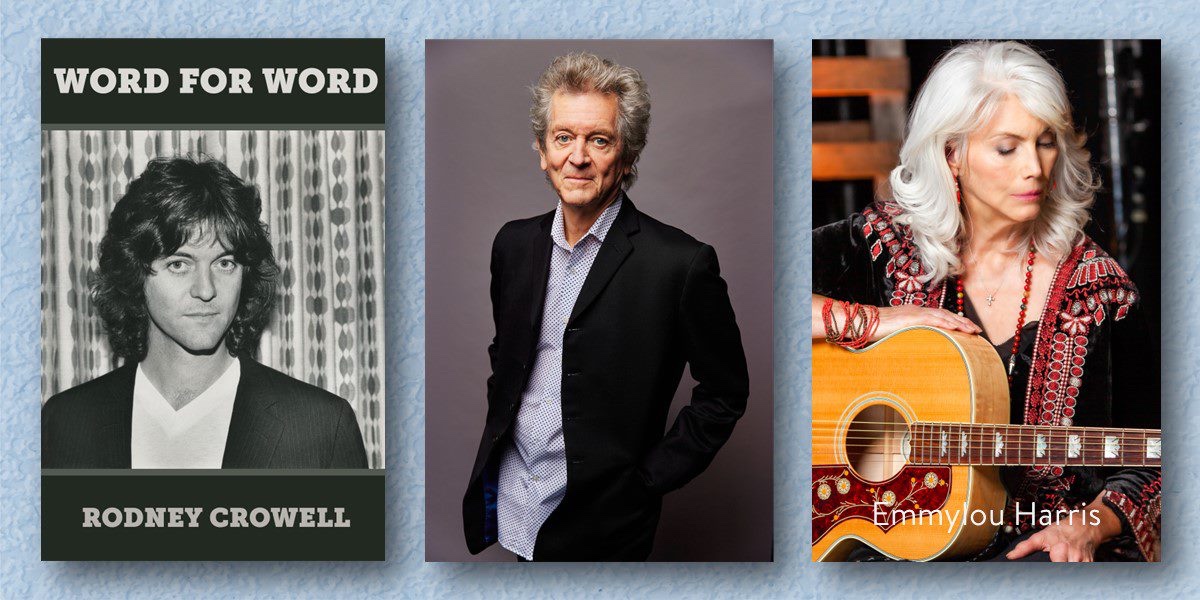 Registration for this virtual event is on Eventbrite. The purchase of Word For Word waives the $10 admission fee. Registration closes at 5 pm the day of the event.

NATALIE’S GRANDVIEW and ZEPPELIN PRODUCTIONS are Gramercy’s Community Partners for this exclusive program.

From growing up in Texas, to living in his car, to landing his first publishing deal, to writing fifteen #1 songs, Word for Word is a lavishly illustrated look at the lyrics of an icon among songwriting giants. Emmylou Harris—who once employed Rodney Crowell as the guitarist, harmony singer, and arranger in her Hot Band—introduced many listeners to his finely-crafted songs, including “Til I Gain Control Again,” “Leaving Louisiana in the Broad Daylight,” “I Ain’t Living Long Like This,” “Even Cowgirls Get the Blues,” and “Ashes by Now.” They all went on to be become hits for other performers, while Crowell went on to carve out a career as the first country singer to earn five #1 singles from one album. Rodney continued writing and recording classics, while other artists continued to take his songs to the top of the charts, including Bob Seger’s recording of “Shame on the Moon,” Tim McGraw’s recording of “Please Remember Me,” and Keith Urban’s cover of “Making Memories of Us.”

In this disarmingly intimate look at Crowell’s songs, he shares pages from his lyric notebooks, personal photographs, and scribbles that reveal the heart of one of this generation’s finest songwriters.

Rodney Crowell is a Grammy-winning artist and songwriter who has written fifteen #1 hits for Emmylou Harris, Johnny Cash, Keith Urban, and others. In addition, his compositions have been recorded by artists such as Etta James, Bob Seger, and The Grateful Dead. Crowell has been honored with the Lifetime Achievement Award in Songwriting from the Americana Music Association, the prestigious ASCAP Founder’s Award, the Academy of Country Music’s Poet’s Award, and induction into the Nashville Songwriters Hall of Fame. He is the author of the acclaimed memoir Chinaberry Sidewalks.

Emmylou Harris is one of the most admired and influential women in music. A 14-time Grammy winner and Billboard Century Award recipient, Harris’ contribution as a singer and songwriter spans forty years. She has recorded more than twenty-five albums and has lent her talents to countless fellow artists’ recordings. In recognition of her remarkable career, Harris was inducted into the Country Music Hall of Fame in 2008 and earned a Grammy Lifetime Achievement award in 2018.

Gramercy Books will be joined by Blue Willow Bookshop in Houston, Bookends & Beginnings in Evanston, and Literati Bookstore in Ann Arbor to present this exclusive virtual conversation.

Note: Rodney Crowell begins a national concert tour in the fall. He will appear on the Music Hall stage at Natalie’s Grandview (OH) on November 11. Tickets are sold out to that concert, but Natalie’s ticket holders who purchase Word For Word when registering for Gramercy’s virtual conversation on September 13 can choose to have Gramercy bring their book to the concert, which Rodney will sign after the performance.