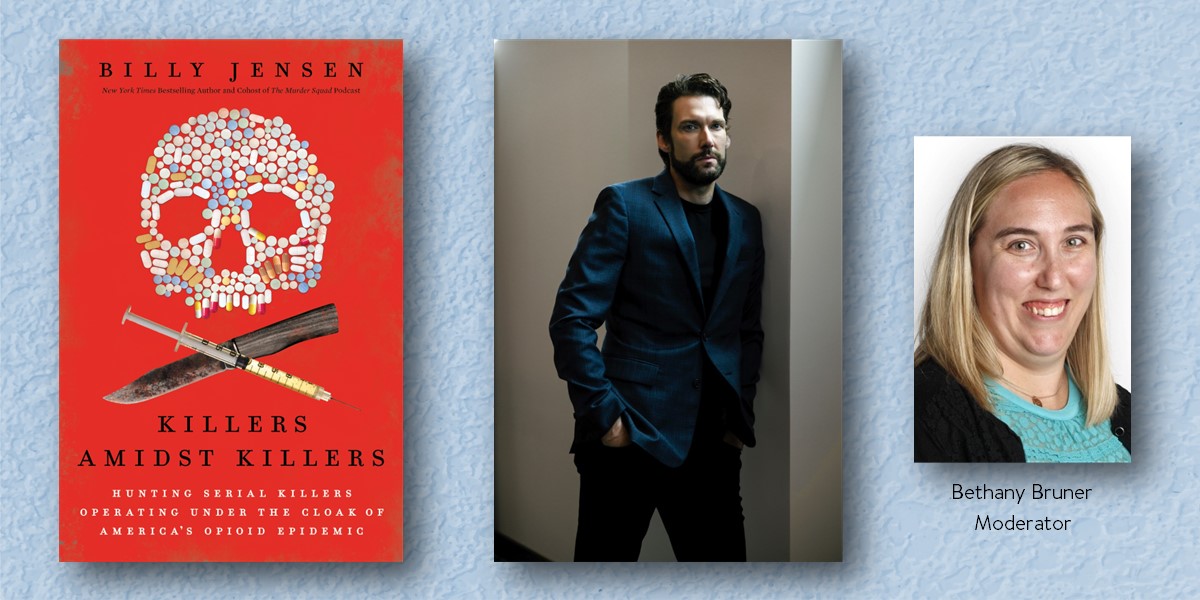 Join True Crime Investigative Journalist and bestselling author Billy Jensen for the book launch of Killers Amidst Killers: Hunting Serial Killers Operating Under the Cloak of America's Opioid Epidemic, the story examining the unsolved cases of eighteen dead and missing women, suspected victims of serial killers in Columbus and Cleveland. Jensen will be in conversation with Columbus Dispatch crime reporter Bethany Bruner.

Registration for this in-person event is on Eventbrite, closing at 6:00 pm on the day of the event. The purchase of Killers Amidst Killers when registering waives the $5 admission fee. Proof of full vaccination is required to attend, and masks are encouraged.

In Killers Amidst Killers, readers ride shotgun with Jensen as he takes on serial killers who are walking among us and planning their next moves in real time. The facts are not in old police reports and faded photos. They unfold before our eyes on the page.

The story begins in 2017, when two young women, best friends Danielle and Lindsey go missing in Columbus within weeks of each other, and their bodies are found soon thereafter.

As Jensen investigates Danielle and Lindsey’s cases, he comes across other missing and murdered women, and before long, he uncovers eighteen of them. All unsolved. And no one was talking about it.

These are not women who were raised in the street. They got hooked on pills. The pills were taken away. They get hooked on heroin. And when the money is gone, they must sell themselves. It happens very quickly. Through his investigations and the help of experts, Jensen identifies serial killers in Cleveland and Columbus.  He suspects the killers, who are on the loose, are operating under cover of the opioid epidemic in America’s heartland.

But, as Jensen points out, serial killers murdering sex workers in the 21st century will get 45 seconds on the local news, and page three in the local paper, and then can disappear in the wind. Jensen hunts these predators to bring peace to the victims’ suffering families while putting a spotlight on a system that is leaving hundreds of thousands of bodies in its wake.

Billy Jensen has solved more than a half dozen homicides and helped find missing persons. Law enforcement agencies reach out to him to help in cases that have them stumped, using him as a “consulting detective.” The New York native has written crime stories for Rolling Stone, Los Angeles Magazine, Boston Magazine, and Miami New Times, was managing editor of the Long Island Press and a crime stringer for the New York Times. After his friend Michelle McNamara suddenly passed away, he and her researcher helped finish her book I’ll Be Gone in the Dark about the hunt for the Golden State Killer, which became a NYT #1 bestseller. Jensen’s own true crime memoir, Chase Darkness with Me, was a NYT bestseller. He was featured heavily in the HBO docuseries I’ll Be Gone in the Dark and produces and stars in the Discovery+ docuseries Unraveled: Long Island Serial Killer. He is co-host of the podcasts The First Degree and Jensen and Holes: The Murder Squad.

Bethany Bruner is a reporter for the Columbus Dispatch and she covers crime, public safety and Columbus police. She has been with The Dispatch for four years and previously worked for the Newark Advocate in Newark, Ohio, covering similar issues. In her free time, Bethany enjoys reading thrillers and books about history, as well as reading, watching, and listening to true crime-related media. She is honored to have helped, in a small way, with Killers Amidst Killers, as she assisted Billy in getting information on a few of the Columbus cases.