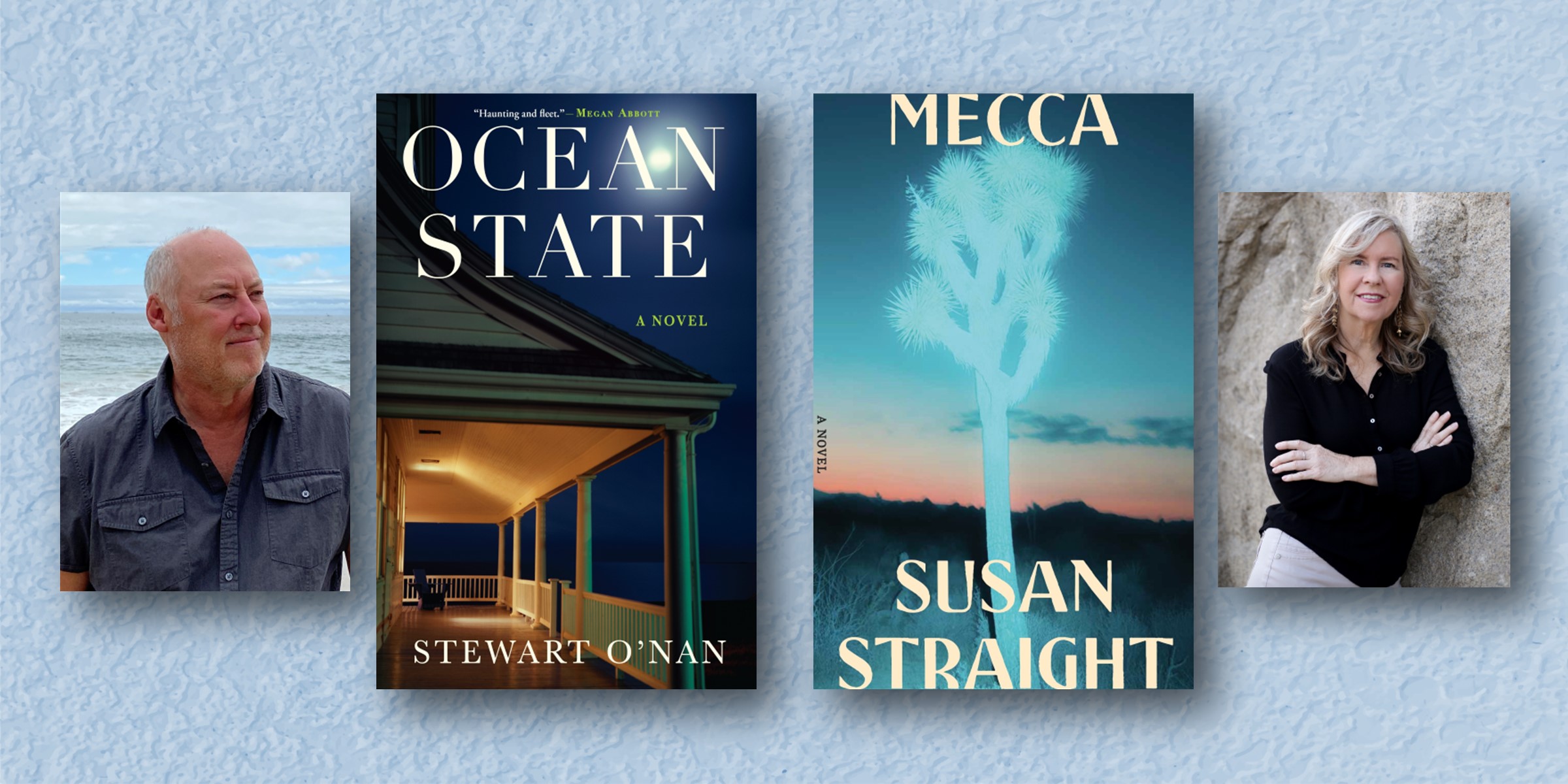 Registration for this virtual program is on Eventbrite. A general admission ticket to access the event is $5; a ticket that includes the purchase of OCEAN STATE or MECCA waives that fee. Registration closes at 5:00 pm on the day of the event.

About Mecca: "The author’s love of the Inland Empire and its people shines through on every page, and there is a Didionesque quality to Straight’s depiction of SoCal characters living in the shadow of prejudice and poverty, but in place of Didion’s free-floating anomie there is fierce compassion. This evokes the best California fiction." —Publishers Weekly (starred review)

Set in a working-class town on the Rhode Island coast, O'Nan's latest is a crushing, beautifully written, and profoundly compelling novel about sisters, mothers, and daughters, and the terrible things love makes us do. O'Nan's expert hand paints a fully realized portrait of these women, but also weaves a compelling and heartbreaking story of working-class life in Ashaway, Rhode Island that is propulsive, moving, and deeply rendered.

In Mecca, the celebrated novelist Susan Straight crafts an unforgettable American epic, examining race, history, family, and destiny through the interlocking stories of a group of native Californians all gasping for air. With sensitivity, furor, and a cinematic scope that captures California in all its injustice, history, and glory, she tells a story of the American West through the eyes of the people who built it—and continue to sustain it.

Stewart O’Nan is the author of numerous books, including Wish You Were Here, Everyday People, In the Walled City, The Speed Queen, and Emily, Alone. His 2007 novel, Last Night at the Lobster, was a national bestseller and a finalist for the Los Angeles TimesBook Prize. He was born and raised in Pittsburgh, where he lives with his family. Ocean State will be released by Grove Press on March 15.

Susan Straight is the author of several novels, including the national bestseller Highwire Moon, a finalist for the National Book Award, and A Million Nightingales, a finalist for the Los Angeles Times Book Prize, as well as the memoir In the Country of Women, named a best book of 2019 by NPR and Real Simple. She is the recipient of the Edgar Award for Best Short Story, the O. Henry Prize, the Lannan Literary Award for Fiction, and a Guggenheim Fellowship, and her stories and essays have been published in The New Yorker, The New York Times, The Guardian, Granta, Harper’s, and elsewhere. She was born and continues to live in Riverside, California, with her family, where she serves as Distinguished Professor of Creative Writing at the University of California, Riverside. Mecca will be released by FSG on March 15.