From author talks to a monthly book club to poetry readings, find it here.

Gramercy Books is a locally-owned, independently-minded neighborhood bookstore located in the heart of Bexley, Ohio. Our philosophy at Gramercy Books is simple: we’re about inspiration and discovery, community and adventure. We connect readers and writers with books they love, and host special events and ongoing visits by authors, poets and songwriters that provoke conversation. Our name, Gramercy, comes from the French words “grand merci,” which translates to “big thanks” or “many thanks.”

We’re so grateful. For books. For our customers. And for the opportunity to bring you this experience.We curate the best books and retail items in easy to locate sections. Our inviting space includes a new café concept from Kittie’s, featuring Stumptown coffee, breakfast items, snacks both savory and sweet, and their iconic cupcakes.

The people who help you find just what you're looking for.

Linda Kass, founder and owner of Gramercy Books, grew up on Columbus’s east side. Trained as a journalist, she began her career as a magazine reporter and correspondent for regional and national publications, such as Columbus Monthly, TIME, and The Detroit Free Press. After a decade working in corporate communications and public affairs within the cable television and broadcasting industries in Detroit and New York City, she returned to Columbus and co-authored The Real Life Nutrition Book (Penguin, 1992). Her debut novel, Tasa's Song, inspired by her mother’s early life in eastern Poland during the Second World War, garnered widespread praise following its May 2016 publication. Her second historical "novel-in-stories," A Ritchie Boy, was released in September 2020 and received the 2021 Gold Medal in Historical Fiction by the Independent Publisher Book Awards. Coming in September of 2023 is her third historical novel, Bessie. Drawing on biographical and historical sources, Bessie reimagines the early life of Bess Myerson, the talented daughter of poor Russian Jewish immigrants, who, in the bigoted milieu of 1945, remarkably rises to become Miss America.

In the Columbus community, Linda is known as a strong advocate of education, literacy, and the arts, and has played leadership roles on the boards of the Bexley Schools, Bexley Education Foundation, Capital University, Columbus Symphony Orchestra, Kidsohio.org, United Way of Central Ohio, and The Ohio State University. She was the founder of, and led, a successful Bexley author series for nine years prior to opening Gramercy Books, bringing internationally acclaimed authors to the community. That program is now under the auspices of Bexley Public Library. Along with curating all of the book-related events at Gramercy Books, she currently serves as an assistant editor for the online literary magazine, Narrative, is on the Editorial Board of Trillium, an imprint of Ohio State University Press, and is a Trustee of Kenyon Review. Besides her love of reading and writing, attending live concerts of all kinds of music, seeing films, traveling, and spending time with family and friends, Linda is an avid long distance road cyclist and rides every year in the grass roots cycling event, Pelotonia, to support cancer research. She is thrilled to bring a neighborhood indie bookstore to Bexley and to serve book lovers throughout central Ohio!

John Gaylord has spent decades in the world of bookselling, beginning in 1969 with his family-owned premier bookstore business in Columbus: Little Professor Book Centers. John held every operational position from stock clerk to store manager for this startup business that expanded from a single location to fifteen stores, including the Little Professor Book Center in Bexley. John most recently served as a bookstore operations specialist for Paz & Associates, a one-stop resource for independent bookstores. A detail-oriented innovator and problem solver, John loves finding ways to make bookstores more profitable. His passions are focused on creating, organizing, implementing, and maintaining the systems and strategies necessary to make a bookstore efficient and successful. He has conceived, opened, and operated twenty-four cutting edge bookstores, ranging in size from 2,000 to 20,000 square feet. John believes that an independent bookstore, whose operations are founded in sound, profitable business strategies and daily routines, will provide a most gratifying experience for owners, staff, and the communities they serve. 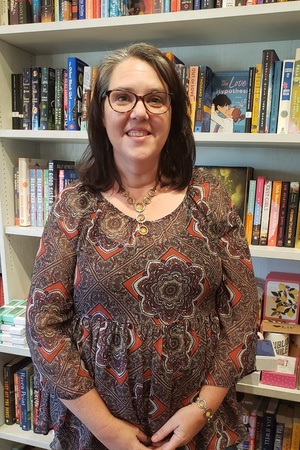 Marcy has always been an avid reader. While her degrees from Ohio State are in social work, Marcy found time to volunteer in the library at her daughters’ school when they were younger. After experiencing some health issues, Marcy found her way to Gramercy Books in 2017 and says, “There’s no better place for me than being surrounded by books and people who enjoy reading.” She served as Assistant Store Manager before being promoted to her current postion as Store Manager in late 2021.

Debbie Boggs recently stepped down as the founding store manager for Gramercy Books where she also served as store buyer and is now exclusively serving in this role. She arrived at Gramercy Books after nearly thirty years working in, managing, and merchandizing independent bookstores, including Little Professor Book Centers, the Book Stop in Houston, and The Book Loft in German Village. For Debbie, her favorite thing about working in a bookstore is putting a book in someone’s hands. She loves to talk about books and wants to know what books you’ve read lately that you love. 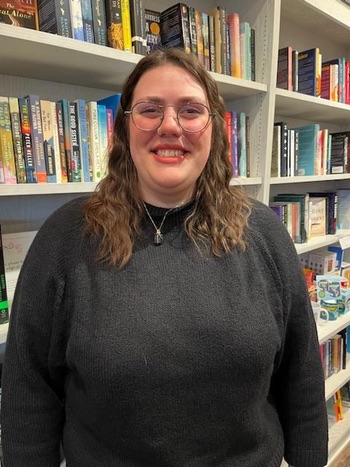 Growing up with a mother who was a librarian, Katie’s interest in reading began at a young age. So, it wasn’t surprising that she found herself working at a college Barnes and Noble after graduating, which revived her love of reading. Katie wanted to work at an independent bookstore and spent two years working at Gramercy Books as a bookseller before being promoted to Assistant Store Manager! 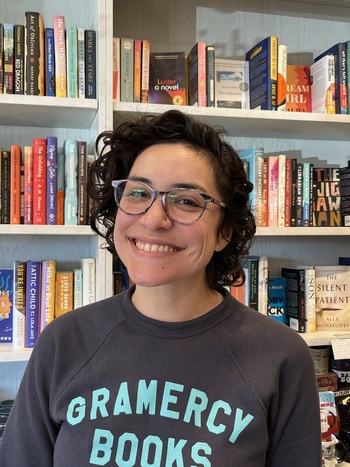 Nikki has always loved the power of books. She joined the Gramercy team when the doors opened in 2016, and has loved being a bookseller through the years, now serving as our Digital Media Manager! While Nikki loves all things fiction, she gravitates toward mysteries, thrillers, and fantasies grounded in reality. When she’s not at work, you can find her chasing around her two kids and taking part in Wagnalls Community Theatre! 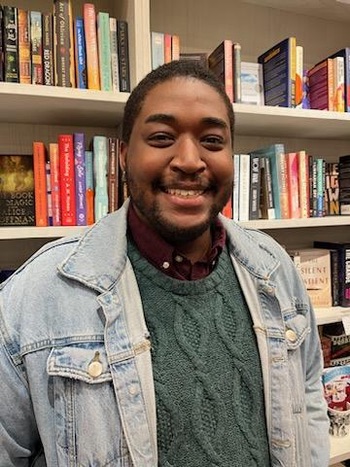 Daniel is a Columbus native who has always had a passion for literature, especially poetry. Some of his favorite poets are Maya Angelou and Jasmine Mans.

When Daniel is not reading, he is either listening to podcasts, cooking, or sewing. 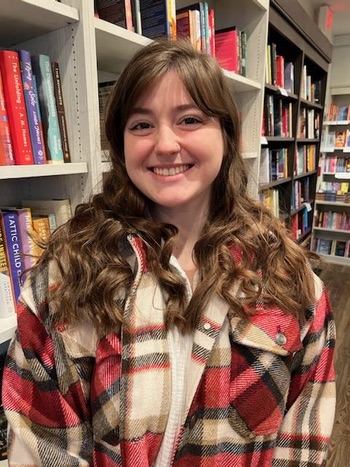 Natalie has always found herself drawn to working around books, whether it be interning for local authors, working for the public library system, or selling books at Gramercy! Her favorite books are always moody and dramatic with a splash of yearning on the side. When she's not working, you can find her wrangling her Mini Schnauzer Franklin, working on music, and writing. 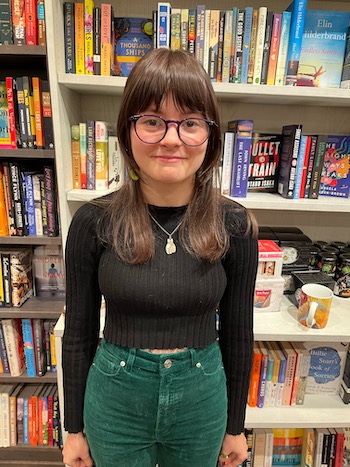 From a young age Zoe has had a love of books. Throughout her life literature has been a comforting force in her life. When she's not reading, she is most likely drawing or working on illustrations for a graphic novel. Gramercy is Zoe’s first step into the world of bookselling and she is absolutely elated to be a part of the Gramercy team. A book she would recommend to anyone who asks is Braiding Sweetgrass by Robin Wall Kimmerer. 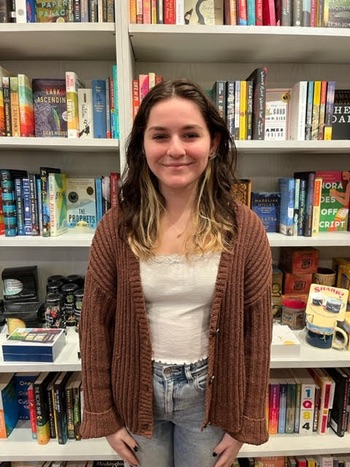 Jillian is a Cincinnati native and in her second year of college at Capital University, majoring in History Education. She loves a good romance or thriller, and when she's not reading, she loves to experiment in the kitchen!

Wally is the Gramercy Books mascot. He is certified as a “canine good citizen” by the American Kennel Club. Wally delights in greeting Gramercy customers and in receiving a biscuit from Kittie’s. He has a monthly #WallyReads book selection that you can follow on Gramercy’s social media pages.